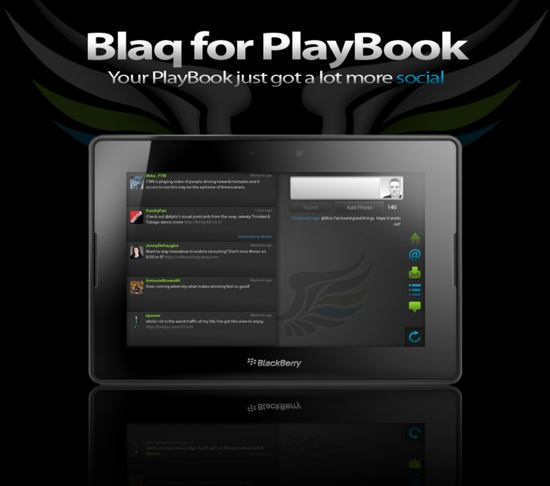 Back in May we let you all know that Blaq for the BlackBerry PlayBook was released and since then the folks behind Blaq have been hard at work making plenty of enhancements to the Twitter application overall. And now, after having been approved in BlackBerry App World -- Blaq v1.1 is rolling out to users and is chock-full of changes:

And that's just what has been added; if you skip on past the break you'll find the full press release announcemment with the complete list of changes and fixes. If you're looking for a really great Twitter client for your PlayBook you'll want to give Blaq a shot -- it's only $1.99 in BlackBerry App World and it's the most complete Twitter solution available after this update.

On Thursday, July 7th, Kisai Labs and Baselime submitted a version 1.1 update of Blaq for PlayBook™ for review and entry into BlackBerry® App World™.

When Blaq for PlayBook™ first launched on May 30th, 2011, it did so without a ton of fanfare or pageantry. There was no feature in App World™, no extensive coverage with major online tech publications and for the first 48 hours or so after approval, Blaq wasn’t even attainable in the Social Networking section of App World™.

However, in the first 5 hours after launch, Blaq for PlayBook™ was already the top paid tablet app in the store. Within the first 24 hours, it sat atop all other paid apps in all of BlackBerry® App World™, PlayBook™ and BlackBerry® smartphone apps included.

In its initial 1.0 release, Blaq was the first app for the PlayBook™ to offer even a moderately full Twitter experience with photo upload capability, in-app web and media previews, real-time streaming and more, but it was still far from its full potential. It was released when it was to finally give PlayBook™ users a suitable alternative to resorting to the mobile web for Twitter.

Now, things are getting serious. The competition is heating up, and its time for Blaq for PlayBook™ to turn that heat up even higher once again.

With Blaq for PlayBook™ v1.1, users can now add multiple accounts and switch between them effortlessly. With just a swipe of a finger from the top bezel, users are presented with a menu (soon to contain a plethora of customization and settings options) where they can tap their avatar and select from any of their added Twitter accounts quickly and easily.

Version 1.1 also brings trending topics, list functionality and a robust search capability on par with the best of the best in mobile Twitter clients.

Take all that, together with a brand-new in-app notification system and countless other cosmetic changes, and Blaq for PlayBook™ stands to sit comfortably at the top perch in BlackBerry® tablet Twitter experience for a while to come.

The v1.1 update should be available in BlackBerry® App World™ as soon as today, Friday, July 8th, pending approval.

As always, Blaq for PlayBook™ is just $1.99 for new users and can be found in App World™ here.

Here is the full changelog for v1.1:

About Blaq for PlayBook™

Blaq for PlayBook™ is a premium Twitter client for the BlackBerry® PlayBook™ tablet from Kisai Labs and Baselime Ltd. Kisai Labs provides applications for mobile devices based on creative ideas from people like you. It aims to provide quality applications and exceptional customer service. For the last two years, Kisai Labs has delivered innovative applications such as Show Me the Images and Mancala Multiplayer (the first commercial application to utilize BlackBerry® Messenger™). Learn more about Kisai Lab’s other popular top-tier BlackBerry® applications and services at kisailabs.com. Baselime Ltd. features the design of Ryan Hamrick, specializing in branding/identity and  user interface and experience design. Learn more about Baselime and get your project rolling today at baselime.com.

Follow the latest updates on Blaq at twitter.com/Blaq.
They say it's for science