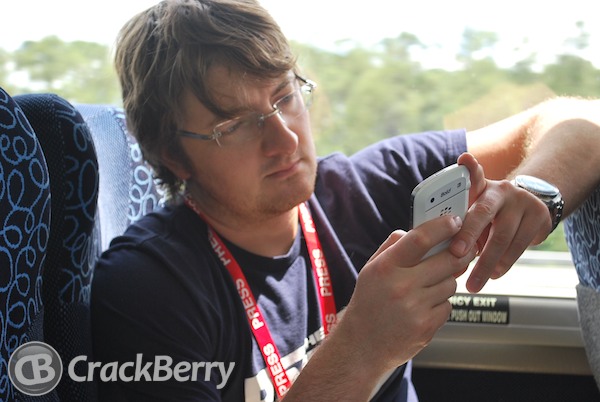 I'm writing this from a hotel room (with crappy internet) in San Francisco, just minutes after the conclusion of RIM's Q1 2013 Earnings Call. We knew the numbers would be depressing, so we were braced for that. What we didn't expect to hear was that the launch of BlackBerry 10 phones is going to be delayed until the first quarter of 2013. Shoot me now. Or at least knock me out and wake me up in 7, 8, 9 months when BlackBerry 10 is here. This news sucks on so many levels, I almost don't know where to begin.

No, RIM didn't give us an exact date for the launch of BlackBerry 10, but we were expecting "later this year". And in contrast to RIM's former CEOs, we've been so impressed with Thorsten Heins since he took the reigns that we were not expecting a broken promise on this. At least I wasn't. I took later this year to mean later this year... not next year.

I was really hoping for a 10 / 10 launch. BlackBerry 10 on October 10 just had a it's meant to be ring to it. If we see BlackBerry 10 hit in January, then the perceived delay isn't *too* bad. That's just a couple of months of extra waiting beyond what we were already prepared for. But Q1 2013 can mean March 31st, 2013, which is literally 9 months away from now if RIM uses up all of the extra time they just gave themselves. That's an *eternity* in the tech world and to a site like CrackBerry.

On the Earnings Call, Heins stated his reasoning for the delays. He refuses to launch BlackBerry 10 without it being perfect, and to get a phone to market this year would mean it would be less than that. Launching with something less than perfect would be game over. He's taking the harder path to making sure BlackBerry 10 platform is done right and what gets launched is compelling. I get that. I respect that. I do think it's the right choice. But of course, like many readers here, I just wish that still meant it would launch sooner rather than later.

This isn't a Palm story just yet. The big difference is that RIM still has money in the bank. $2.2 billion right now. And they're doing everything they can to save money so they have more time to execute on the launch of BlackBerry 10. It's clear that's still their primary goal and where they believe they can build the most value for shareholders, who have obviously taken a massive hit these past 18 months.

There are really two ways to look at the situation following today's earnings report and investor call. One way, which you're going to see reported on a lot, is that RIM is dead and what we're witnessing now is the slow and drawn out death of what was once a successful company.

The other way to look at it, is as a re-birth. For all the Harry Potter fans out there, think about Dumbledore's Phoenix Fawkes, who when he gets old burns up and is born again from the ashes. Between a new CEO, restructuring, reorganizing and giving birth to a new mobile computing platform in BlackBerry 10, until the bank account runs dry (or some other business event intervenes) RIM still has the chance to be reborn a much stronger company. This is the way I'm looking at it and hoping for things to play out. A year from now I would love to look back at this blog post and say yep, RIM gave birth to a beautiful baby.

But today it became apparent though that RIM is suffering from PPP - a painful platform pregnancy. BlackBerry 10 is still going to take a while to get here, and it's a difficult pregnancy to say the least. Apple worked three years on iOS behind the scenes secretly before unveiling the iPhone. Those are good conditions. RIM is trying to give birth to BlackBerry 10 when the media, Wall Street, shareholders and even consumers are scrutizinizing every move RIM makes and the company's balance sheet and cash flow is not nearly as healthy. Those are bad conditions. It's not going to be easy for RIM.

This isn't new news though. We've known for a long time now that everything hinges on RIM getting BlackBerry 10 to market successfully. What we learned today is that it'll be a few more months delayed. RIM is going to be out of the game for Black Friday and Christmas. Another opportunity lost. They're going to have to suffer another quarter with less than stellar earnings before there's hope of seeing some new growth. But as long as they keep the revenue engine firing on at least a few cylinders and spend their savings carefully, there's still time and hope, and I'll keep the faith. Hopefully many of you out there will too - more than ever, RIM needs our support. Let's give it to them.