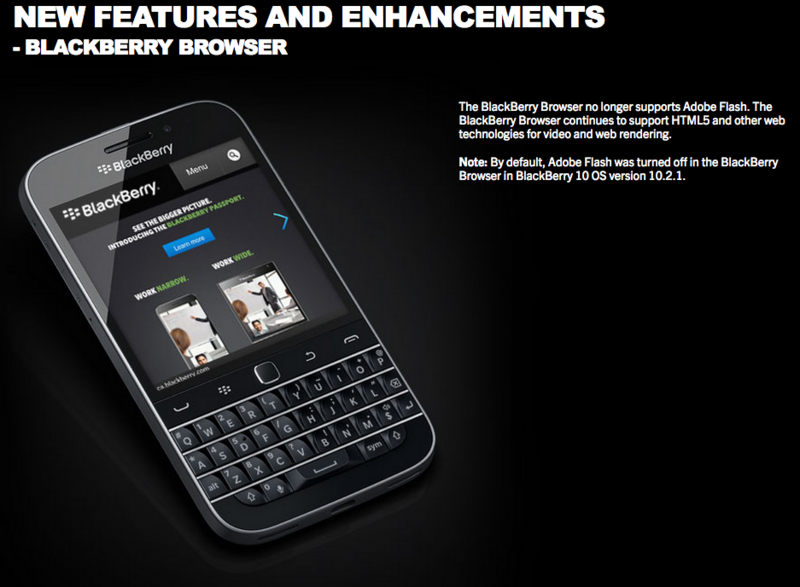 As some folks have noticed, especially BlackBerry Classic owners and those running OS leaks, Adobe Flash has been removed from BlackBerry OS 10.3.1. For their part, BlackBerry has never really said much about the situation directly but the BlackBerry Knowledge Base was updated with an explanation for the removal. As expected, it mentions Adobe stopped development of mobile Flash back in 2011 and the mobile web is now moving to HTML5.

BlackBerry 10 OS has been on the market for the past two years, and we continue to have the highest mobile HTML5 test score. We understand how important web browsing is to you, which is why we have always invested in giving you the best possible web browsing experience.

During this time Adobe has stopped Flash development support for mobile browsers. This is consistent with the shift of mobile web content generally moving towards HTML5. As a result, we can no longer support Adobe Flash beginning with the upcoming software release of BlackBerry 10 OS version 10.3.1.

We understand this may affect your web browsing experience and are working hard with major partners to lessen the effect this might have.

If you are a web developer, BlackBerry 10 supports a wide variety of media codecs, formats, and network protocols. If you have any questions on implementing video or audio on BlackBerry 10 please head over to our development forum and we will be happy to assist you.

Couple those reasons with the fact updates have ceased outside of critical bug fixes and security updates it's easy to see why BlackBerry made the choice to remove it but as has been mentioned in the CrackBerry Forums many times now, there's still plenty of sites out there that use Flash that won't work through any other means.

The good news though is that BlackBerry is open enough to still be able to run Flash if you REALLY need it. You can install a number of different Android browsers such as Dolphin, Photon, FlashFox, Puffin and more plus, the mobile Flash APK directly from Adobe. We can do up a guide for those who need it of you wish because it doesn't work with the BlackBerry browser. You must use it in conjunction with an Android browser.

Now, I fully expect the comments to fill up here with arguments for and against Flash just like the forums but that's that. Flash is gone in 10.3.1 and unless there's some huge change of mind, it's not coming back. Personally, I think the browser runs faster with it not included but at the same time, there were times when it certainly did come in handy while using my BlackBerry. I'll be keeping another browser around just in case.