After getting a good look at the Z30 hardware, Michael Clewley, BlackBerry's director of handheld software product management,  walked us through some of his favorite features in OS 10.2. A lot of these are old hat for those that have been tinkering with the leaks, but let's take a look anyway.

First up, Michael highlighted the detailed lock screen notifications. By tapping on icons on the side for each type of incoming notification, you could get a brief preview of the incoming message. Work space notifications remain locked out as normal with Balance, which is key for those who want to keep their work information private.

Then we checked out the new priority section of BlackBerry Hub. This filters for messages you start, contacts and conversations you designate, messages from contacts with the same last name, and e-mails that are flagged as high priority. The priority hub extends beyond e-mail too, and can include notifications from other apps (though third parties can't get in on the fun until 10.2.1). After that, Michael walked us through the new adaptive sharing menu. Now instead of just listing the different apps that you can share to, BB10 will pay attention to where you're sharing most frequently and provide shortcuts to those sources. This can cut a tap or two from the overall process. After sharing to the same contact or app two or three times, they'll show up prominently at the top of the sharing list. This can also make it very easy to share to meeting participants from your calendar.

Prior to this, we had a pretty thorough dive into 10.2. Though Michael emphasized that as far as voice and video calls go "Z30-to-Z30 is the best-in-class, bar none" thanks to the array of microphones on the device, they did mention that the audio codecs used will be finding their way to other devices and improving call quality there too. This was a major part of the Z30 preview. The BlackBerry folks sounded convinced that the call quality over BBM is well above what you get with HD voice on cellular, and will still be leading the way once voice over LTE becomes commonplace. 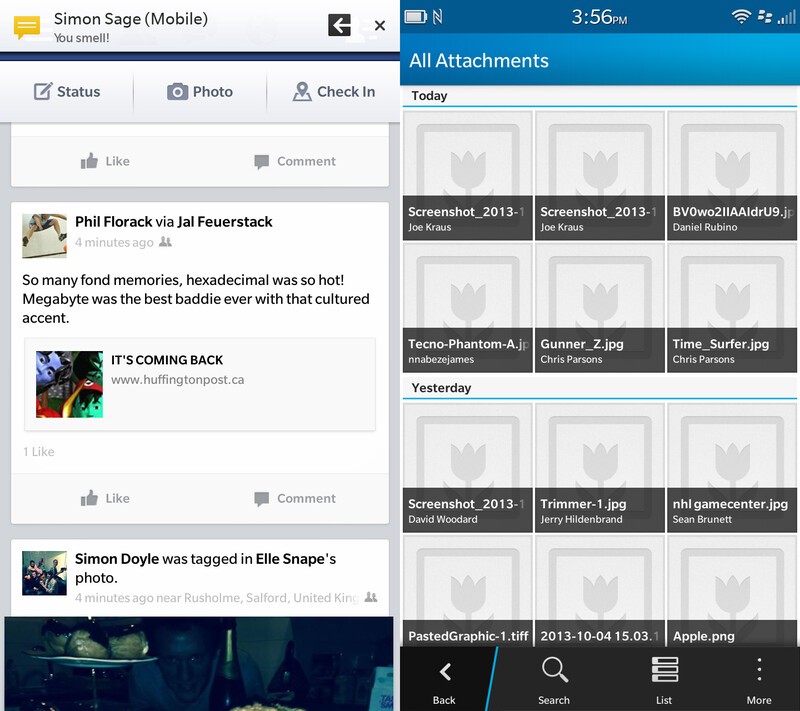 In BlackBerry 10.2 you can now view attachments by sender or date in the Hub, though the system smartly filters out files related to signatures. There are new audio tones for the keyboard (for period and backspace, for example) in order to build confidence when typing. There are the much-beloved instant previews (or toast notifications) for any hub app. Instant replying only works for SMS and BBM for the time being. Calendar meetings now have a menu option to send a message that you're going to be late - just move the slider depending on how late you're going to be and hit "send."

Ignoring phone calls now lets you send canned replies, but this is a bit better than other platforms as the message is sent through the channel you most commonly talk with the contact through. This way you aren't, for example, trying to send a text message to a land line. Copy and paste have been refined so that they show in-line icons rather than hiding them away behind a double-tap. This is fantastic, and includes a share option to get text right into other apps.

BlackBerry 10.2 will be rolling out to in-market devices in late October, after the launch of the Z30. There are a lot of other small tweaks that I'll be sure to highlight in my Z30 review later this week. For those who want to stay up-to-date, be sure to follow Michael's BBM Channel.