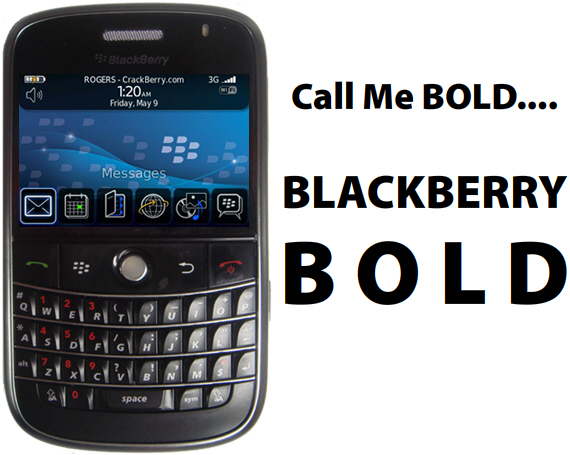 Hey BlackBerry Addicts, you heard it here First! As predicted, the BlackBerry 9000 will launch with a name to go along with the numbers, and that name is the BlackBerry BOLD. We've been speculating whether the 9000 would receive a branded name of the Curve and Pearl flavor, and it now appears with *reasonable* certainty that this is in fact the case.

A seemingly innocent blog post comment put us on the initial trail. From there, a search for BlackBerryBold domains revealed that all of them are already registered. Two more tipsters later, my confidence in the BlackBerry Bold name was starting to increase. Watchful eyes may have even noticed the words BlackBerry Bold jump out at you in Part IV of the BlackBerry Bold 9000 Review. Finally, after yet another confirmation from a reliable source, I am now convinced the smartphone RIM will be announcing next week at WES will be called the BlackBerry BOLD 9000.

Assuming I'm right about the 9000 being branded the BlackBerry BOLD, what I want to know is what do you think of the name?! Like it? Love it? Hate it?  Rather it just be called the 9000? Don't Care as long as the Device Rocks?! Let us know in the comments!!!