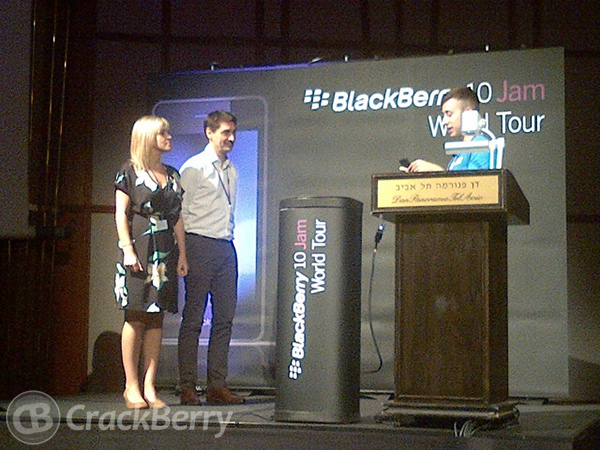 The BlackBerry10 Jam World Tour reached Israel today with yet another fantastic Jam Session. It's been awesome to receive feedback along the way from developers attending these events. Since Alec Saunders joined the RIM team as the VP of Developer Relations, we have witnessed BlackBerry take a grass roots approach to rebuilding their developer community this past year. Racking up the airmiles to take these events around the globe is clearly working. A few years back I typically found the mindset of BlackBerry app developers to be one of tolerance. They tolerated building apps for BlackBerry. Now I keep talking to developers that are truly passionate about building BlackBerry apps. I've been following BlackBerry for years now, so it's amazing to witness this 180 degree change, and is truly great to see.

While nobody from the CrackBerry team was on hand at the Israel event, our friends from Search4BBM were there, including their CEO, Itay Adam and Founder, Barak Hirchson. They let me know the room was packed with Israeli app developers.

I've been wanting to interview Mr. Adam for a while now, so asked him some questions following the event, which you can read below. Mr. Adam is a true web entrepreneur and an app developer pioneer. Back in 2007 he even had a discussion with Steve Jobs to help in bringing the developer community together to help drive iPhone apps forward. Knowing that, it makes listening to what he has to say today about building for BlackBerry even more interesting.

Itay: Well, it's simple to answer. As an entrepreneur I always look for the new "camp fire". The app developer community is now focusing on Apple and Android because most of the people act as herds. They follow the current trends. What they don't really understand is that trends are like movements and movements are built over time, step by step and piece by piece. The BlackBerry "camp fire" looks small to most of the app developers but what they don't know is that you can grab a seat at the first circle around the camp fire where the warmth will reach you more than the ten story high "camp fire" of Apple when you're sitting in the 10,000th circle. I must admit that being a part of the BlackBerry community feels like being a part of this all that you need, we'll see to it all, fraternity.

2. Kevin: So basically you're saying that you believe in RIM?

Itay: RIM is now the third player, right? Wrong. I say that they are the second player. There's Apple and Android
but the Android platform is not a device, it's a platform. Once Players such as Samsung and HTC will start selling
devices with BlackBerry 10 and Windows 8 platform, which as I see it is something that is bound to happen, RIM will be a massive player. They hold not only killer devices, they also are building out an amazing platform. And I will tell you another thing. The "end user" doen't really care about the "platform" - they want a slick and sexy device. They don't care about the code, they care about the UX/UI. This is RIM's chance to turn the wheel over.

3. Kevin: Do you believe that such a scenario may happen?

Itay: I believe that we've yet to see RIM's big picture.

4. Kevin: So what should the common app developer do?

5. Kevin: Can you elaborate on that?

6. Kevin: Ok, last question. If you had the chance to meet Mr. Heins, what would you say to him?

Itay: Sexy is everything!

Kevin: Lol. Good answer. And I agree! Thanks for taking the time to chat with CrackBerry today and sending on photos from the event.