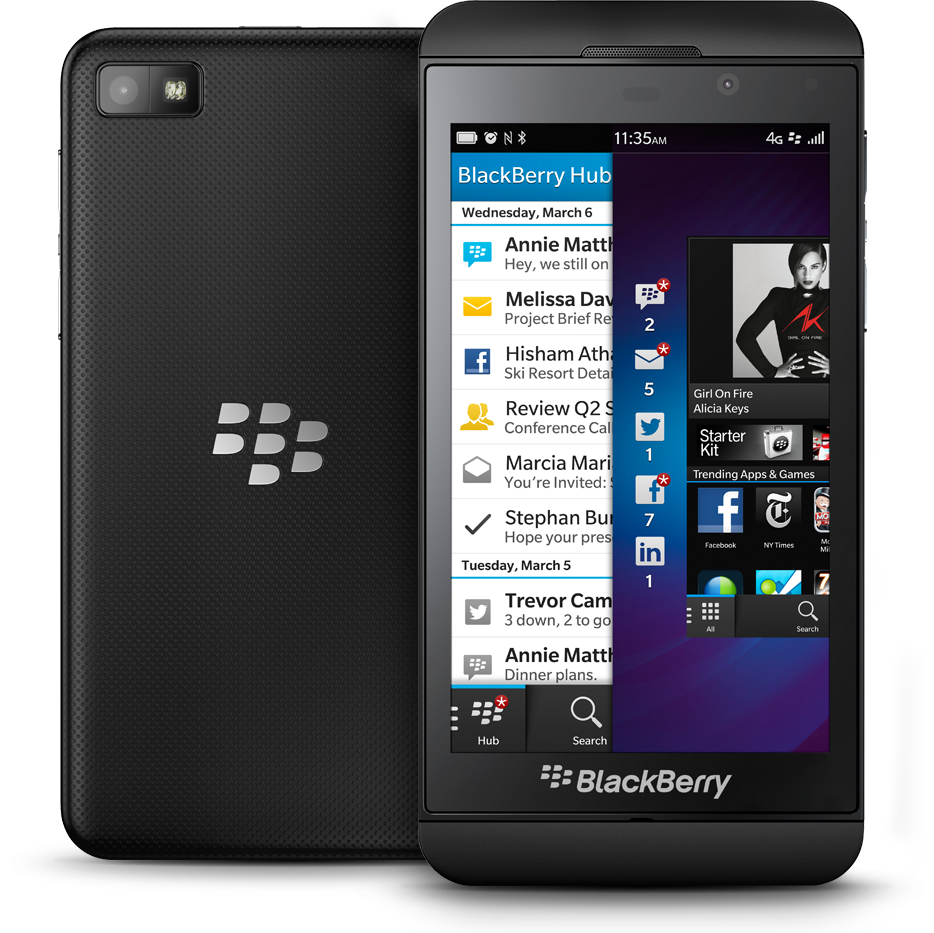 Arguably, the most significant feature of the BlackBerry Z10 is the operating system. Though the primary focus on communication hasn’t changed in the software experience, the user interface has moved from one that relies on physical buttons to gestures. The most important one is the quarter-turn swipe from the bottom frame to the right frame to access the Hub. This is where notifications from all sources are unified in one place where users can respond and otherwise interact with them. Swiping up from the bottom returns users to the Active Frame screen, where minimized version of all running applications are visible, while menus can be opened by swiping from the top pane or long-pressing on individual items for context-sensitive actions.

The virtual keyboard for BlackBerry 10 uses a prediction engine powered by SwiftKey which makes suggestions based on personalized usage on a per-app basis. Suggested words appear above the next letter on the keyboard, and are picked by swiping up from that key. The camera software includes a new TimeShift function which shoots a fast burst of photos, and allows users to selectively edit individual faces to different shots taken in that burst to effectively create a moment that never really existed.

What started back in mid-June with Verizon rolling out BlackBerry 10.3.2 to the BlackBerry Classic, has now extended into devices such as the BlackBerry Q10, BlackBerry Z10 and BlackBerry Z30. Verizon customers on any of those devices can now go ahead and check for updates where you should find OS 10.3.2.858 (Software version 10.3.2.556) available for download if you've not already...

Save 15% on all BlackBerry Accessories

It's time to gear up and buckle down for this weekend's big game! No matter what team you're rooting for this year, we can all agree that 15% off all accessories here at ShopCrackBerry is a pretty sweet deal. We've got cases, chargers, batteries, etc. for the hottest BlackBerry devices including the BlackBerry Passport, BlackBerry Classic, BlackBerry Z10, Blackberry Z30, BlackBerry Q10...

We're wrapping up 2014 by extending a 20% savings on all BlackBerry accessories until midnight December 31! With plenty of new products to choose from for popular devices like the BlackBerry Passport, BlackBerry Z10, BlackBerry Classic and BlackBerry Q10, you can definitely get the best bang for your buck before the new year kicks off. To receive 20% off your entire cart, use coupon...

20% off all BlackBerry Accessories

We're taking the holiday rush into consideration this year and offering you last minute shoppers 20% off our entire selection of accessories here at ShopCrackBerry. That means cases, chargers, batteries, Bluetooth and anything else you can find to stuff your stockings with! With popular devices like the BlackBerry Passport, BlackBerry Z10, BlackBerry Q10 and the BlackBerry Z30 flying...

Free Charger with any Order!

You might have noticed that we've been throwing some pretty sweet discounts your way the last few days or so. Well, we've got another little treat for anyone who places an order today. Whether it's a case for your BlackBerry Z10 or a pack of screen protectors for your BlackBerry Passport, you'll receive a Griffin USB car charger with your order—absolutely free. That is of course, while...

GREAT DEVICE ON THE CHEAP

Want a Verizon BlackBerry Z10 for $100 no contract?

Looking for a BlackBerry Z10 for Verizon but don't want to bother with a contract? Well, you might want to hit up your local Fry's location if you have one near you. It seems as though for the past few days they've quietly been having a clearance deal on BlackBerry Z10's where you can pick one up either free with a contract or for only $100 without a contract. That's a pretty sweet...

The Beta Test is Over.

New BlackBerry CEO John Chen has already proven to be a very pragmatic leader, willing to make difficult decisions in order to keep the company afloat. He has said on many occasions that he'll exit the handset segment entirely if it proves to be in the best interest of the company, but has also made it clear that it's among the last things he wants to do. BlackBerry smartphones maintain...

What would it take to get me back to BlackBerry?

Several months ago I embarked on an experiment. As a guy who'd used BlackBerry since 2000 I had deep experience with the platform along with good experience on iOS. But I had practically no experience on Android. So I put my Z10 on my bedside table and left it there while I moved my SIM into a Samsung Galaxy S4. At the time it was among the best Android handsets available. I realize I'...

The real reason My Cousin Vinny downgraded from the BlackBerry Z10 to a Bold 9900 and is waiting on the Classic...

"Because I can use it way better while driving" Ok, Ok. Now before you go ripping Vinny apart in the comments, let me tell the full story here. My cousin Vinny isn't Joe Pesci. He's actually the guy below. And Vinny isn't technically my cousin. In reality, he's my fiancée's godmother's sister's daughter's boyfriend (and that's the truth). He's also a hardcore BlackBerry user. Not...

If you're in Canada and are in the market for a fantastic new BlackBerry, but you don't want to spend a fortune it looks like Telus have some super deals going on with the Z10 at the moment. Although the BlackBerry Z10 is not at this super low price on the Telus website you can grab it from Future Shop or BestBuy for the bargain price of $199.99. It may not be quite as glamorous as...

Groupon is currently selling a limited quantity of GSM-unlocked BlackBerry Z10 smartphones, for $239.99, The Z10 currently sells for $299 at ShopBlackBerry, despite Groupon's claim that the device has a value of $799.99. Customers can pick either black or white, and the deal lasts until Friday, April 11. Orders will not ship to Alaska, Hawaii, Canada, or Puerto Rico. Purchases are...

BlackBerry has announced that starting today, customers will be able to purchased unlocked GSM versions of a number of BlackBerry 10 smartphones directly from the company's Canadian store ca.ShopBlackBerry.com. The available devices are the BlackBerry Z30, Z10, Q10, and Q5. These devices are compatible with Canadian LTE and 4G networks. Press release: BlackBerry 10 Smartphones Now...

After stock running dry in India the BlackBerry Z10 is back

Back at the start of March (2014) we told you that the BlackBerry Z10 had sold out in India after the company had reduced its price and had sold over three times as many devices as they expected. The good news is that the Z10 is now back in stock if you fancy picking one up.  Although stock running out would have been frustrating for some consumers, it sure is encouraging that...