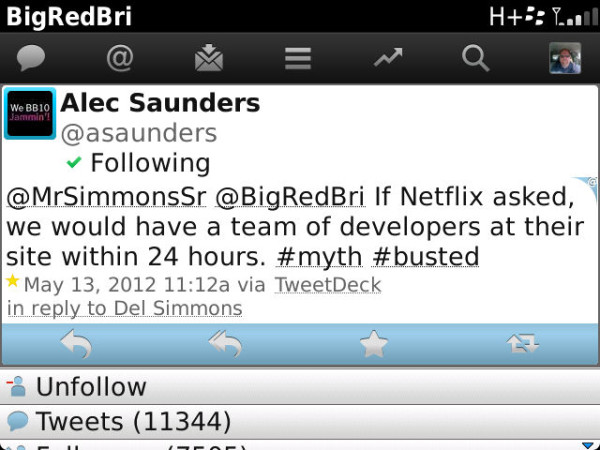 Here's the deal. When BlackBerry 10 launches later this year, it's critically important that there is no major app gap on the platform. We don't need 500,000 apps (of which 400,000 are crapps), but we do need to have all the major ones there in good functioning order.

Two of the biggies that we still do not have confirmation on are Netflix and Skype. CrackBerry Nation has been very vocal in wanting these two services on the PlayBook/BB10. Heck, we've even done an email petition campaign to the CEO of Skype.

There are lots of good theories as to why Skype and Netflix are not committed to BB10 yet (will save those for another post), but a few days ago RIM's VP of Developer Relations Alec Saunders took to twitter in addressing a question which clarified that it's not RIM holding up the Netflix train. If Netflix asked... RIM would have a team of BlackBerry developers at Netflix's door within 24 hours to get the app built. I'm sure the same would hold true for Skype.

So Netflix... and Skype... let's get with it here and confirm you're coming to BlackBerry 10. Just do it.. or else I'm going to have to start getting desperate and sacrifice myself for the cause . And that's blood (and bad PR) that you don't want on your hands. CrackBerry Kevin to go on a Hunger Strike for Skype and Netflix?? You know I would do it. Don't make me.