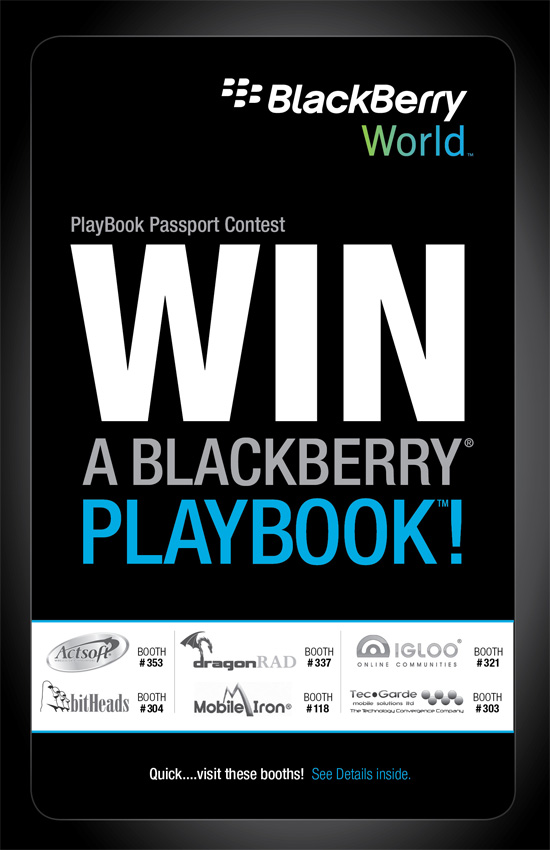 With BlackBerry World just around the corner, we're starting to get revved up for what is to be the BIGGEST BlackBerry event of the year. Hopefully we'll see some cool news announcements next week and get our hands on some new BlackBerry Smartphone hardware. The other thing that's always nice to see are FREEBIES. I've got my fingers crossed that RIM will up and decide to give all attendees a free PlayBook (I know... I'm probably dreaming, but seriously, I need another one to mount in my car) but if that doesn't happen you still have another chance to get a free BlackBerry PlayBook if you're at the show.

A number of BlackBerry World sponsors are running a passport program/contest to win a 16GB PlayBook during the conference. The idea behind the passport program is that attendees walking the show floor collect stamps at each sponsor's booth. Once all the stamps have been collected, the person is entered into a draw to win a prize - in this case a 16GB PlayBook. Below are the list of participating companies and their respective booth numbers:

So that's it. If you're at BlackBerry World in Orlando next week, be sure to grab your PlayBook Passport and collect your stamps and get entered to win a free PlayBook! See ya there!