The announced but not yet released WebKit-based BlackBerry web browser was shown off via video demo twice today at Mobile World Congress. Mike Lazaridis, RIM's Co-Founder and Co-CEO, gave it a minute of glory during the morning's general session, while an hour later it was Mike Kirkup, RIM's Director of Developer Relations, who gave a quick walk through of what's in store for the browser at the BlackBerry Developer Day at App Planet to those in attendance (video above). 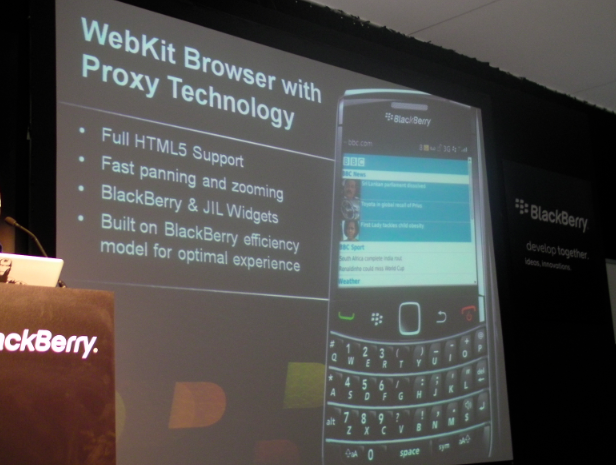 Things are definitely looking promising here for us BlackBerry users, even when taking note of the fact the demo provided today was a recorded video vs. a live demo and you can see the browser was connected to WiFi vs. 3G. Getting data down to the BlackBerry fast has never been an issue for the BlackBerry web browser, rather it's the rendering of the page once that data is on the device. It seems the Torch Mobile folks that joined RIM were able to hit the ground running and the BlackBerry is rendering Javascript and pages A LOT faster than any other previous BlackBerry web browser. I'm not sure if RIM has any devices on hand at MWC with the WebKit browser installed but I'll do my best to get a minute of hands-on time with one if they do.

No word on roll out yet, but the sooner the better, that's for sure. Wouldn't it be nice if the rollout came along with an OS update that featured some significant UI updates? BlackBerry Heaven, that's what I'd call that. Stay tuned for more!