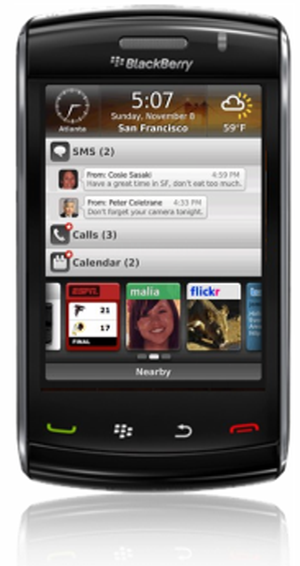 A lot of talk has been generating from the BlackBerry Super Apps webinar that was held yesterday. The above pic is from one of the slides shown during the webinar showing off how UI layouts are meant to be. Nicely integrated, visually appealing and user aware and what is possible in the contextual BlackBerry OS. For example, applications that remember your position upon open and closing and data flow of information at a glance.

Since the example given is nothing like what the current BlackBerry OS looks like, BerryScoop wanted to speculate a little bit to ask what if this was actually what OS 6.0 was to look like? In no way claiming it will but just as a general question. Would it appeal to the masses? Is it enough or would users be expecting more? All valid questions as I see it for as ideas for the next OS.

As much as we all like to speculate and enjoy the thought of what the next BlackBerry OS should and will look like, the official word on this is that it is in no way a reflection of any ongoing development work. For folks who like finer details look at the date and location on the device. November 8th, San Francisco. This app, called Concierge was shown off at the recent BlackBerry developer conference by Curtis Susaski to ring in the arrival of the BlackBerry widgets SDK just as an example of what is possible in the way of contextual additions to the BlackBerry OS.