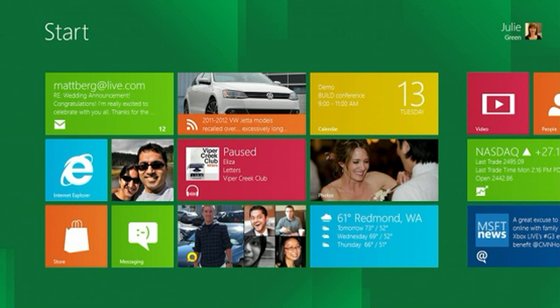 Some interesting happenings today in the World of tech. Microsoft is currently holding their BUILD: Windows Conference in Anaheim, California and during that conference they took the time to demo some new Samsung built built tablets running Windows 8. With iOS, Android and QNX already on the market, we're left to wonder where Microsoft fits in here and how many folks out there have been waiting for a tablet optimized experience from Microsoft.

Granted, Windows 8 is built and designed for both personal computers and tablets but given the fact it is making use of their Metro UI found on Windows 7 phones it does make it idea for use on tablets and looking through the CrackBerry forums, some people have opted to choose Windows 7 tablets such as the HP Slate, despite it's non tablet optimized UI over such things as the BlackBerry PlayBook, Apple's iPad and even the Honeycomb powered Samsung Galaxy Tab 10.1.

Microsoft has been playing close attention to this apparent spec race happening as well, the tablets Samsung built for the Windows 8 developers are running dual-core 1.6GHz Intel Core i5-2467M processors with 11.6-inch 1366 x 768 Super PLS displays not to mention USB and HDMI ports, a microSD slot and a 3G modem. Apparently they read Phils Motorola Droid Bionic review and laughed at its listed specs.

But ultimately, is there a place for Windows 8 on tablets? Does Microsoft have what it takes in Windows 8 to go up against RIM, Apple and Google or is Windows 8 doomed to personal PC's? A lot of people have moved away from Windows in general in the past few years and moved onto Apple computers and even Linux builds such as Ubuntu and now Microsoft is hoping their latest desktop environment is also going to be good for their tablet devices as well. It's a risky gamble for Microsoft to be taking. The Windows 8 developer preview will be available later tonight. You can learn more about Windows 8 here in the meantime. Will any of you all out there be grabbing it to check out the latest from Microsoft?