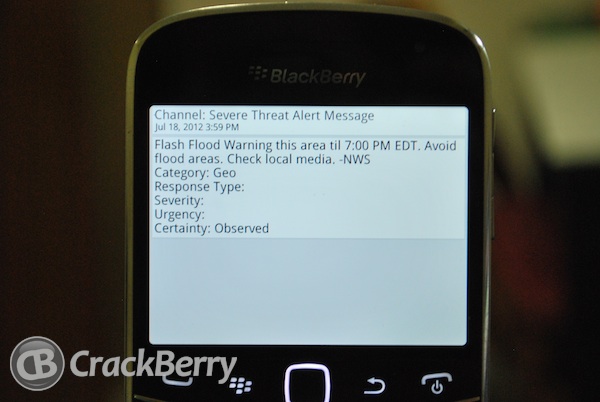 Last night as I started to wrap up for the day, a crazy storm was hovering overhead. It was a big one that dropped down on most of New Jersey and New York (and even further north) and looked pretty damn scary. I was staring out the window hoping my newly planted trees didn't blow away, and it was then that I heard the obnoxious Emergency Broadcast System tone spewing from my office. Out of habit I immediately turned to my TV, but upon noticing it wasn't even on, I saw that my Bold 9900 was lit up. I had received what was dubbed a Severe Threat Alert Message on my device.

If you remember a few months back, AT&T, Sprint, Verizon, T-Mobile and other carriers all flipped the switch on the Wireless Emergency Alert (WEA) texts for consumers. These texts are issued for severe weather such as flash floods (as was my case), tornados and hurricanes as well as Presidential and Amber Alerts.

If you've been running OS 7.1 you may have noticed you've had an Emergency Alert Message inbox on your device. If you jump in, you can see all your WEA messages and also have options to disable all but the Presidential alerts.

Side note - if you wan't to play the obnoxious emergency alert sound and annoy everyone, scroll down to Try It and have a go.

I did some quick Twitter recon and found out my pals @jcarty and @asacco both got the same message on their BlackBerry as well (all of us on different carriers). This was a first for all of us, but still pretty cool to know it's up and running. How useful it will be for smartphone users that have access to plenty of weather apps is still up in the air, but those with feature phones will most likely find it welcome.

Did you get an emergency alert yesterday (or any day?). Let us know in the comments!