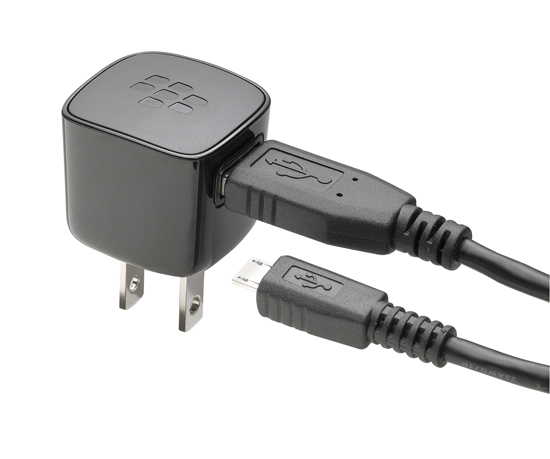 At WES 2010 I sat down with Mike McAndrews, RIM's VP of Product Marketing, who in addition to talking shop (follow-up story to come) walked me through the new BlackBerry product announcements made at the event, including the white BlackBerry Bold 9700, the Bold 9650 and the Pearl 3G. In addition, Mike also showed me the little beauty shown in the photo above (more photos below) of the new BlackBerry USB Power Plug.

The new OEM BlackBerry USB Power Plug is going to replace the standard BlackBerry wall charger that has traditionally shipped with a new BlackBerry device. Instead of shipping a wall charger and also a separate USB cable for syncing, this new design simply utilizes the syncing cable as part of the charger. When it comes to traveling, you now have a lot less to lug around. RIM actually used to have this sort of USB styled charger (view pic) but went away from it some time ago, so are making a return here in a slimmer, updated design. The new BlackBerry Power Plug is definitely similar in look and feel to what Apple currently does with their chargers, though I'd argue the new BlackBerry one is sexier.

Mike told me the new BlackBerry USB Power Plug will make its debut with the new BlackBerry Pearl 3G, which further ups the consumer feel of the new Pearl. From there we should see RIM roll this out with most new devices (not sure that the Bold 9650 will get it at launch though - since it's a "world phone" I think it will ship out with the standard wall charger/adapter - but will inquire for more details here) and it will become available as a standalone accessory available for purchase so you can buy extra to keep everywhere you go.