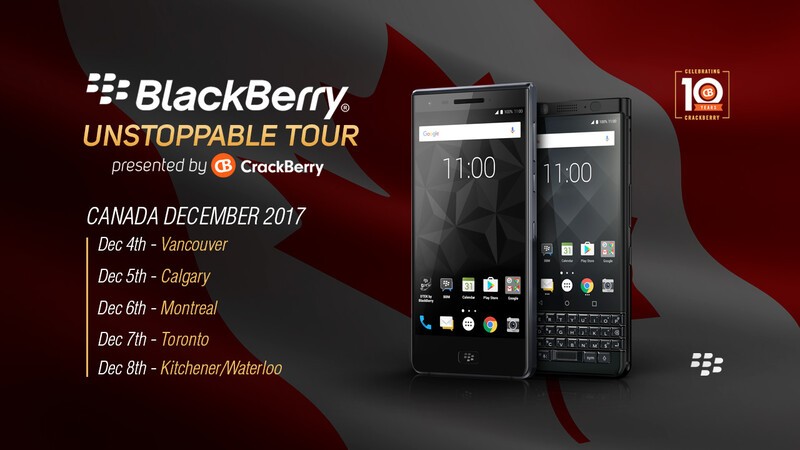 Following the success of our European BlackBerry UNSTOPPABLE Tour next week we're bringing the BlackBerry Motion and KEYone show to FIVE cities in FIVE days in Canada. We'll be starting in Vancouver, then heading to Calgary, Montreal, Toronto, and finally wrapping things up in BlackBerry's birthplace of Kitchener/Waterloo.

As with all of our BlackBerry events, we'll have plenty of food, drinks and BlackBerry fans in attendance, along with the latest BlackBerry Smartphones including the BlackBerry Motion and BlackBerry KEYone for attendees to check out. We'll also have swag and prizes to give out too and for the Canadian tour we're also planning on having BlackBerry Silver and Black Edition KEYones on hand FOR SALE! So if you've been holding off on getting one of these phones until you can get it in your hot little hands, this could be your time to buy. If you're RSVP'd to attend you'll be receiving a mailer soon where you can express your interest in buying so we can help plan our inventory.

If you're a longtime CrackBerry reader, a BlackBerry fan or just thinking about picking up a new BlackBerry Motion or BlackBerry KEYone, these are events you won't want to miss! Hit the links below to jump over to the Meetup page for your city where you can RSVP. Spread the word! All of the venues have been finalized. Compared to our last round of events in Canada we're kicking these ones off a little earlier to make it easy for the downtown crowd to drop in and check out the phones, and things will kick into gear after 6pm for all the fans traveling a little further to arrive.