Probably the most useful class I took way back in Junior High was typing with Mrs. Judy Flint. Of course, that was when people still used manual typewriters and hunted wooly mammoths with big spears. But that skill has since served me well (typing, not spear wielding) through the many late nights I’ve spent hacking away at the computer. I’m no speed demon, but thanks to Mrs. Flint, I can still comfortably type 60 words per minute without even glancing at the keyboard.

Unfortunately, my thumbs aren’t as comfortable typing on a BlackBerry as my fingers are on a computer keyboard. I wonder if today’s version of typing class ought to include a session or two on thumb typing on a mobile keyboard. I love reading emails on my BlackBerry, but I loathe typing responses and I end up limiting myself to a few short sentences when I have to reply. 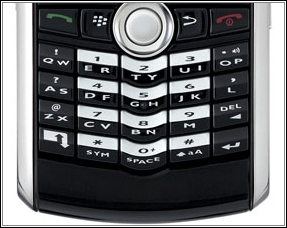 So I went looking for a few typing tips and stumbled on over to BlackBerryForums.com. Mark Rejhon, a super moderator over there, has put together a rather excellent tutorial on thumb touch typing. For those of you looking for some speed tips, I’d recommend checking it out.

And slow as I am on a thumb size QWERTY keyboard, I’m even worse on the SureType style layouts like the 7100 series and the new BlackBerry Pearl. I much prefer a full size keyboard, but I know people who do like the abbreviated layout. Here’s a flash tutorial on using the SureType devices.

And finally, I found the website ChicagoLogic.com. Is there a keyboard layout for mobile devices that’s better than a QWERTY layout? These guys think so. I took their typing challenge and I must say that their layout works very nicely for a small handheld device. Check it out and share your thoughts.

## This Article Was Originally Published by AllBlackBerry.com on October 21, 2006.