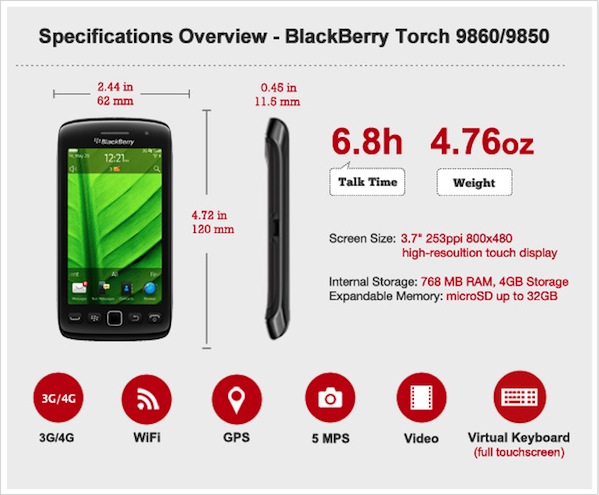 The BlackBerry Torch ditches a physical keyboard in favor of an all touchscreen form factor that sports a great 3.7" screen. The device styling is great, but it seems like some corners were cut in certain areas. While the touchscreen gets the job done, the front navigation buttons seem a bit out of place. They are raised a bit from the device itself and have a little too much play for my liking. I wish RIM had gone with flush buttons to better finish off the styling on the Torch 9850. The convenience keys and volume rockers on the side of the device don't help much either. They seem way too flimsy and thin, and the Mute button gets lost in the shuffle as it is barely even visible.

Media and web browsing take the top spots on the Torch 9850 without a doubt. The bright 3.7" screen is powered by a 1.2Ghz processor and 768MB of RAM. This keeps things trucking along, although at times there was a bit of lag (not much at all though) that hung things up a bit. When it comes to actually messaging on the device, everything works pretty much as expected but at times gets help up by the on-screen keyboard. I found it tough to type at length as many times I would get frustrated by errors, but that obviously varies from user to user.