Contest: 25 Copies of Evolution OS6 to be won. Leave a comment! 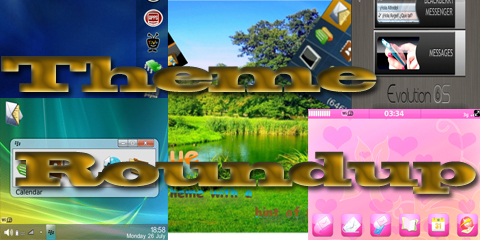 I love writing the theme roundup every week, getting to see the hot new themes as they come out, and building a working relationship with theme developers, both established and new. I really had a great week last week for tips, with my BBM, twitter, and email all filling up with some awesome new themes. Hit the jump and check out some of the best stuff to hit my BB this week.

A lesser known theme from the development powerhouse Ahaz, this uber-cute girly theme has it all for fans of pink. The hearts you see in the screenshot above are actually animated,"falling" down the screen for a great effect. Better yet, the animation can be turned off via a button by the battery meter, for those concerned about lag or battery drain. Six icons are set on the bottom of the homescreen, all user-defined, and bounce when focused. Fully skinned for the ladies, and including a great set of custom icons, you can check it out today in the CB store for $2.99.

I found this theme in the forums last week, where Matt was running an open beta of the theme to test and get feedback. He fired me a BBM to let me know that the theme is now live in the store, released in all it's premium glory. Those whgo participated in the beta testing will still want to check it out, as he has added a lot of features not seen in the free download. This theme has been fully skinned to give a complete Windows 7 feel to your device, and the homescreen is packed full of function. The "window" you see in the screenshot above contains 10 user-defined icons in a sliding dock, and can be hidden or shown, as you prefer. The "arrow" button in the bottom banner launches a today screen selection, and a weather slot in the top left allows your weather at a glance. Definitely worth the cost, you can find it in the CB store for only $1.99.

I got an email on the tip line the other day from a dev I've never dealt with, giving me a heads up on some of his themes.Apparently he was unaware that I even had a tip line until the other day, but I'm glad he has that figured out now. For Storm users that love plenty of icons on their homescreen, but don't want to sacrifice their wallpaper view for it, this theme include two hidden docks, completely user-defined. Eleven different applications can be accessed via the docks, and the small banner in the bottom right is perfectly sized to display a large clock without taking up too much of the homescreen. Full of hidden hotspots, and including a fully integrated hidden today, hit the link below to pick this theme up in the CB store for $1.99.

Another gem from the forums, this is a great free theme, without a lot of frills. The focus in this theme is visual, rather than adding a lot of fancy function, and it's done quite well.As the name of the theme suggests, the main colors are orange and blue, and have been used tastefully throughout the theme to accent the elements nicely.Mainly a modified stock theme, the developer has included a set of custom icons, and I love the way they have changed the icon focus on the homescreen. Available as a free OTA download, you can get it from the forums thread below.

I absolutely love the look of this homescreen, and the custom detail that has gone into it blows me away. I have seen tons of OS 6 "clones" in the past couple of months, but this one doesn't try to emulate what we've seen, but instead takes the OS 6 icons from bbthemelab and creates a whole new concept. Those bars you see at the top? they scroll up to show various standard app shortcuts, each one fully customized. Mini icons sit in a bottom dock, and even the unread icons are customized to fit with the theme. Available in the CB store for $7.00, it may be a little steep for some, but make sure you check out the video of the theme running before deciding against it.
Contest: I have 25 copies of Evolution OS 6 to give away! Just leave a comment on this post to enter. Contest ends this Sunday at Midnight PST. Please only leave one comment, multiple entries wont count.

That's it for the theme roundup this week, keep those tips and suggestions coming to the roundup email at [email protected]