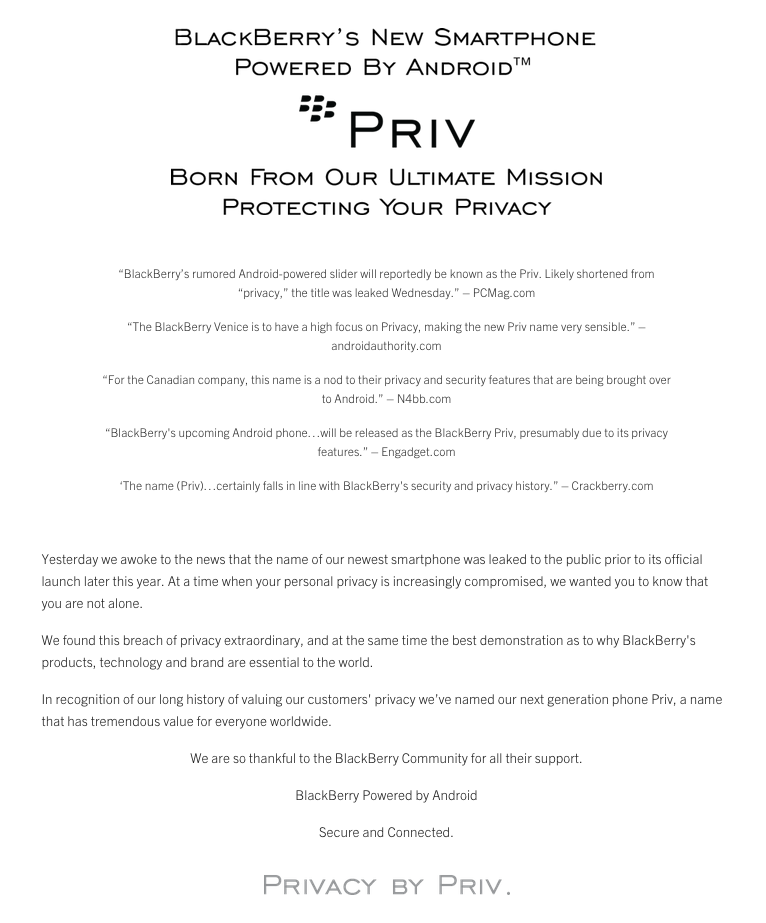 When the news landed that BlackBerry's upcoming slider was to be named Priv, it was clearly a leak for the company. In a rather brilliant, seizing the moment move, BlackBerry took the leak as an opportunity to reach out to the very customers they're looking to attract while also introducing the Android-powered Priv by BlackBerry. In a new spot appearing on The Wall Street Journal, BlackBerry highlights how even they are affected by privacy breaches.

Yesterday we awoke to the news that the name of our newest smartphone was leaked to the public prior to its official launch later this year. At a time when your personal privacy is increasingly compromised, we wanted you to know that you are not alone.

We found this breach of privacy extraordinary, and at the same time the best demonstration as to why BlackBerry's products, technology and brand are essential to the world.

In recognition of our long history of valuing our customers' privacy we've named our next generation phone Priv, a name that has tremendous value for everyone worldwide.

We are so thankful to the BlackBerry Community for all their support.

BlackBerry CEO John Chen also didn't miss the chance to reach out to current BlackBerry 10 customers either. In a new CNBC post, Chen noted while some may see the move to Android as a surprise, there is continued demand for devices such as the BlackBerry Passport and Classic by consumers, enterprises and regulated industries. 'I want to be clear: fans of BlackBerry's workhorse BlackBerry 10 smartphones can continue to depend on us, and we appreciate their commitment. We will be releasing new updates of this powerful OS in the upcoming year.'