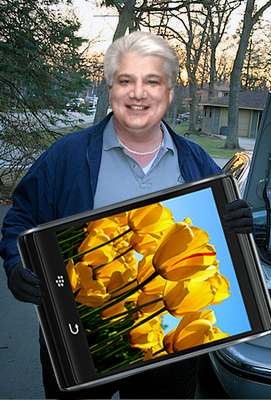 To tablet or not to tablet... that is the question!

Alright, since the issue of the BlackBerry tablet seems to not be going away any time soon, we decided we'd summarize and share what information we know and what information is still left totally up in the air at this point. We certainly do not know all the details here, frankly no one does. Anyone outside of those involved directly with the project are basing information on pure speculation and that is it. Some of that speculation may be accurate, some of it may not. In fact, from what we gather the project's roots reach quite a way back so that many of the details we're hearig now have already likely changed (maybe many times over), so you really have to take anything anyone says with a BIG grain of salt. Yes, we're included in this statement.

First, lets clear up the codename issue. Cobalt was definitely one of the names assigned to the project and this name reaches back months and months now. It may or may not have been the first name for it but jetpac.s and Blackpad have now been bounced around across the web as well. In all reality, this idea came long before the announcement of the iPad. So, any statements saying that Research In Motion is just now trying to play catch up to the iPad are pretty much unfounded. That's not saying the release of the iPad hasn't changed how Research In Motion treats this product, cause it surely does.

Many people when speaking of the tablet have asked what its target market would be. Business, consumer, both? The details we've heard are that it was/is to be a consumer driven device. More specifically a multimedia tablet. One that will be completely independent from BlackBerry devices. With that focus it's assumed that you would be able to view videos, read eBooks and eMagazines as well as listen to music and read your favorite RSS feeds. Also mentioned in this scenario was the ability to create and edit documents as well as take notes and mark tasks. Nothing too crazy here.... rather things you'd expect a tablet to do.

Who Will Build It?

Lets take a step back just for a second and think about Research In Motions current R&D departments. Right now, we're pretty sure they have all available resources working on new smarpthone devices. Do they really have the resources to dedicate a team to building a tablet based product? Likely not. Could they? Sure, but I'm not so certain RIM would want to do that at the moment when the smartphone battle is raging.

Recently Research In Motion has been picking up acquisitions. DASH, QNX and Viigo have all been brought in. Maybe if RIM really wants to get a tablet product built, its development would be outside their traditional engineering and development cycle? Now while signs lead up to the fact Research In Motion had the tablet in mind long before the QNX acquisition, QNX seems to have the means to produce such a product if Research In Motion wanted them or at the very least have a huge hand in the development but not manufacturing. Think about it. They design middleware, realtime operating systems and specialize in embedded design. If they are the ones Reseach In Motion has in mind for the project, then the pieces all seem to fit. The manufacturing portion has been suggested to of been passed off to Quanta who deal with large contracts from their home base of Taiwan.

The most recent information surrounding the possible operating system here comes to us from The Street. It was mentioned in that article that "The BlackBerry maker had hoped to offer a Google Android-powered tablet later this year" We're not exactly sure where this information came from. Be it from Rodman Renshaw analyst Ashok Kumar directly, who was mentioned in the article or if it came from another source. That notion may be exciting to some, but am pretty sure from a RIM perspective would have been crushed immediately the moment someone would have even suggested it.

One thing from BlackBerry 6 that we've seen mentioned associated with the tablet was the "swipe gestures" many folks have attributed the patent specifically to the tablet and the tablet alone. Yet, as was revealed at WES the swipe gestures have moved into the realm of handheld devices making use of the trackpad. In the end, this portion of the tablet saga remains a wide open subject for anyone who wishes to take on the task of finding out more information.

As we mentioned previously, no one really knows what is going on with the Research In Motion tablet. I'd personally go so far as to say not even Research In Motion knows at this point what is happening. Do they shelve the idea and move on? Do they make use of recent acquisitions and move into a market which seems unfamiliar to them? All this talk of tablet business seems like a story from days past. Yet, at the same time we could be now talking about a future product from Research In Motion. Time will tell I guess.