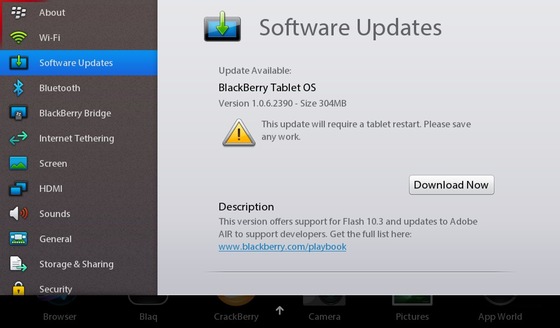 It was only a few days ago that we let you all know that v.1.0.6 of the BlackBerry Tablet OS was headed to the BlackBerry Beta Zone for developers to test out. Well, looks like testing went well as that release is now available for all to download. As noted on the Inside BlackBerry Blog, changes include:

This latest version of the BlackBerry Tablet OS includes support for Adobe® Flash® 10.3 and support for Adobe® AIR® 2.7 software. This means that with this update you should experience even better performance for Flash videos than before, and be able to access new applications that are being built with Adobe AIR 2.7 software. For all the developers out there, be sure to check out our post on the Inside BlackBerry Developer’s Blog.

Today’s update also incorporates the Adobe Flash Player updates as noted in Adobe Security Bulletins APSB11-12 and APSB11-18, which addresses issues that can potentially affect any PC, tablet or other device with an operating system that supports Flash. While there are no known reports of any BlackBerry PlayBook tablet users being affected by these Adobe Flash issues, we (as always) encourage all BlackBerry PlayBook users to update to the newest version of the BlackBerry Tablet OS. For more information about what these security updates mean to the BlackBerry PlayBook please see our security advisory.

Have at it, the download is available now when you check for software updates on your BlackBerry PlayBook. When completed, reboot and give it a run through -- don't forget to drop some comments here on the blogs and let everyone know how it's running for ya. Keep reading for more on the update.

Adobe® announced yesterday the availability of updated plug-ins for Adobe Flash Builder® 4.5 and Adobe AIR® 2.7 that support the BlackBerry® PlayBookTM tablet. Adobe AIR technologies enable developers to leverage their work across multiple devices and form factors. With the latest release of Adobe Flash Builder, mobile app developers can export applications for the BlackBerry PlayBook tablet and other mobile devices from a single codebase.