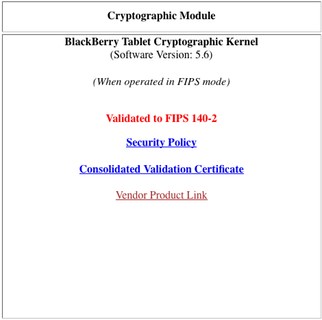 The BlackBerry PlayBook has just become the first tablet to be approved under FIPS for use within the U.S. federal government. While the FIPS certification may not mean a whole lot to end users off hand, as it stands right now -- the approval of certification for the BlackBerry PlayBook OS is a pretty big thing to have happen. Many folks have speculated that one reason for the delays of native email and PIM on the PlayBook was due to the lack of FIPS certification. While that may or may not be true, we'll soon find out find out if the certification will help move these updates along. As Isaac highlighted:

FIPS - Federal Information Processing Standard - this is the cryptographic gold standard for the US government and is the required standard for many government agencies on their computers and handheld devices. The FIPS 140-2 certification is issued by the National Institute of Standards and Technology.  A FIPS 140-2  certificate applies to an exact module name, hardware, software, firmware and/or applet version.  Translation: if RIM needs to 'tweek' something on this device it will need to be re-certified by NIST to maintain the 140-2.

Now that Government has deemed the PlayBook OS secure, it meets RIM's standard policy on security as well and we all know how much Mike Lazaridis likes to ensure folks that BlackBerry devices are secure. Either way, the approval is a good thing that will hopefully trigger some reaction from RIM to push out some new features for the BlackBerry PlayBook.

"RIM is pleased to announce that the BlackBerry PlayBook is the first tablet approved under FIPS for use within the U.S. federal government," said Scott Totzke, Senior Vice President, BlackBerry Security at Research In Motion. "This certification demonstrates our continued commitment to meeting the needs of security-conscious organizations and enables the U.S. federal government to buy with confidence knowing that the PlayBook meets their computing policy requirements for protecting sensitive information."

BlackBerry PlayBook is a powerful, ultra-portable tablet that fits comfortably in one hand. It has a stunning 7-inch high resolution display, offers true multi-tasking capabilities and a high-fidelity web experience. It also allows for secure pairing with BlackBerry(R) smartphones via the BlackBerry(R) Bridge(TM) app, which enables users to access their BlackBerry smartphone's email, calendar, address book, memo pad, task list, BBM (BlackBerry(R) Messenger) and browsing functionality using the larger display on the tablet.

About Research In Motion Research In Motion (RIM), a global leader in wireless innovation, revolutionized the mobile industry with the introduction of the BlackBerry(R) solution in 1999. Today, BlackBerry products and services are used by millions of customers around the world to stay connected to the people and content that matter most throughout their day. Founded in 1984 and based in Waterloo, Ontario, RIM operates offices in North America, Europe, Asia Pacific and Latin America. RIM is listed on the NASDAQ Stock Market (NASDAQ:RIMM) and the Toronto Stock Exchange (TSX:RIM). For more information, visit www.rim.com or www.blackberry.com.

Forward-looking statements in this news release are made pursuant to the "safe harbor" provisions of the U.S. Private Securities Litigation Reform Act of 1995 and applicable Canadian securities laws. When used herein, words such as "expect", "anticipate", "estimate", "may", "will", "should", "intend," "believe", and similar expressions, are intended to identify forward-looking statements. Forward-looking statements are based on estimates and assumptions made by RIM in light of its experience and its perception of historical trends, current conditions and expected future developments, as well as other factors that RIM believes are appropriate in the circumstances. Many factors could cause RIM's actual results, performance or achievements to differ materially from those expressed or implied by the forward-looking statements, including those described in the "Risk Factors" section of RIM's Annual Information Form, which is included in its Annual Report on Form 40-F (copies of which filings may be obtained atwww.sedar.com or www.sec.gov). These factors should be considered carefully, and readers should not place undue reliance on RIM's forward-looking statements. RIM has no intention and undertakes no obligation to update or revise any forward-looking statements, whether as a result of new information, future events or otherwise, except as required by law.