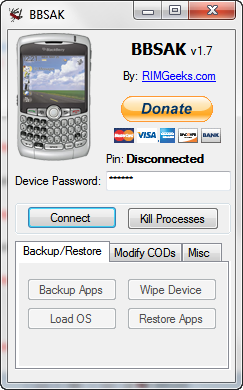 The folks at RIMGeeks have been busy these days keeping their BlackBerry swiss army knife app updated. The latest version is now available for download and corrects a few issues found in version 1.6. A quick look at the change log reveals a few key improvements and fixes:

BlackBerry Swiss Army Knife is great for advanced users who want more control over their device and what their OS loads or doesn't load for that matter. A great all around tool with awesome functions, stick to the rule of thumb though. If you're unsure of whast some of the operations are--better to not mess around with them or at the very least, check the CrackBerry forums for some more information.
They say it's for science