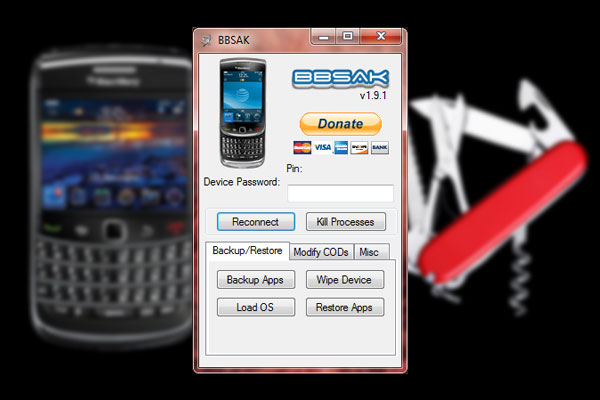 BlackBerry Swiss Army Knife (BBSAK) is a tool; just as a hammer and a thermonuclear reactor are tools. Placed in the wrong hands, they can cause destruction. Similarly, using BBSAK can render your BlackBerry inoperable. That being said, BBSAK is also a tool for fixing that. If you carefully - and I cannot stress that enough - follow instructions, it should always work properly for you. If you do not feel comfortable in poking and prodding the innermost guts of your BlackBerry, then BBSAK is not for you.

BlackBerry Swiss Army Knife is a Windows application (sorry Mac users) for controlling your device when BlackBerry Desktop Manager just isn't enough. It comes jam-packed with features designed to let you modify your BlackBerry in ways that the DM just wasn't created to do. Backup third-party apps, load alternate OS builds without the hassle of uninstalling and installing them from your computer, screen captures, and more. BBSAK really is an all-in-one tool; and it's completely free.

Creating useful backups of your Third-Party apps can be a chore. The Desktop Manager can handle app backups, but it's not the simplest way to do so. There's no direct way to trigger a simple app backup. That's why I like BBSAK's backup. All I have to do is make sure BBSAK can see my BlackBerry and then click backup. After specifying where I want the complete backup, BlackBerry Swiss Army Knife takes care of the rest. Backup COD's (your application files) can be found in C:\Program Files\BBSAK\Backup\

Once you are done, you'll see a screen like the one above. If you do not see a list of COD files that were backed up, then the backup was not successful. Though a quirk of programming, BBSAK can erroneously tell you that apps were backed up when they are not. This usually happens when both BBSAK and the BlackBerry Desktop Manager are both trying to talk to your BlackBerry. In this case, Desktop Manager wins. The solution? Close the Desktop Manager and click "Backup Apps" again.

Presumably after backing up your applications, you'll want to put them back on the BlackBerry at some point. That's where Restore Apps comes in. While you cannot pick and choose what apps are restored from within the program, BBSAK offers a no-nonsense way of restoring your smartphone programs. This process does take a while to complete and will be longer if you have many apps to be restored.

Pro Tip: BBSAK will restore the COD files that are located in the Backup folder you specify, located at C:\Program Files\BBSAK\Backup\.

If you're an experienced BlackBerry power user, then you've probably installed your fair share of OS updates on to your computer. It irks me to have to uninstall the old OS from the computer before installing the new BlackBerry OS. And of course, all of this is before you load the OS on to the BlackBerry itself. BBSAK takes care of that, allowing you to keep multiple OS loaded onto your computer. To the average user, this probably makes to sense. Trust me when I say downgrading an OS is a lot easier this way.

Hands down, this is my favorite feature of BBSAK. Sometimes, you want a clean slate. Sometimes you want to completely wipe everything off your device and start anew, with a clean install of the OS. I do this for my windows machines about once every year.

Beware. There is no undo after starting this function. Before completely deleting the operating system and all files on your BlackBerry, you may want to consider backing up your email, contacts, applications, etc. Just a bit of friendly advice. When it completes, you'll have a completely useless BlackBerry on your hands.

From here you can use BlackBerry App Loader or BBSAK itself to load the OS. Remember, if you are not experienced with loading the operating system onto a BlackBerry, please take the time to search the forums and read our BlackBerry 101 articles before getting started. This is not something a person should just dive right in to.

In basic terms, COD files are the actual files used to install and run an application on your BlackBerry. BlackBerry Swiss Army Knife gives experienced users the ability to save these files to the computer, delete them from the BlackBerry, and install them to the BlackBerry. Many BBSAK users will not use this tab, but below is a video from the creators explaining these advanced features.

Does what it says. Takes a screenshot of what's showing right now on your BlackBerry. I've used this feature many times to create screenshots for articles here at CrackBerry.com. Saved screen captures are saved as BMP images to My Documents\BBScreenies.

Saves all COD files to the attached computer. According the developers, creators of hybrid OS builds will find this useful.

Your BlackBerry logs many, many events. Errors and normal bits of operation are logged in the Event Log. To most, these logs are full of gibberish; but to an app developer, the information contained in the log can be invaluable.

"The Factory Reset function is used by those who have an IT Policy put on [their] Blackberry via a BES Server. This function will remove the IT Policy from your device." - BBSAK.org

Checks for an update to the BBSAK program.

BlackBerry Swiss Army Knife is an excellent tool for advanced users to tweak their BlackBerry's. Personally, I use BBSAK at least once a week, if only for screenshots. Be on the lookout for BBSAK to make an appearance in future BlackBerry 101 posts.