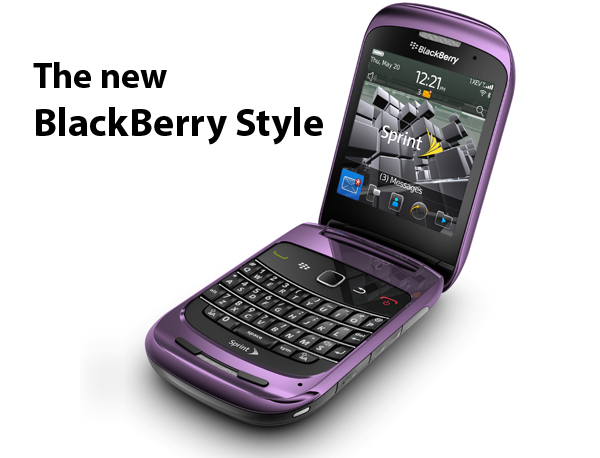 The BlackBerry Style is the first CDMA BlackBerry to launch with BlackBerry 6 and also the first flip phone from Research In Motion to feature a full physical qwerty keyboard. We had the chance this past Friday to get briefed on the new phone by David Smith, VP Product Management at RIM and David Owens, VP Marketing at Sprint, who were both excited about the Style on Sprint. For more info you can check out the BlackBerry Style tech specs, visit sprint.com/bbstyle and keep reading for our notes from that call and for the  the full press release.

Speaking to David from RIM and David from Sprint it was clear both companies are excited for the new BlackBerry Style.

From the Sprint perspective, David Owens made it clear to us that Sprint customers love BlackBerry. A lot of that love came from RIM's iDen devices, and in the last couple of years Sprint has done well selling all CDMA BlackBerry Smartphones. The Curve is always one of Sprint's top sellers. With the BlackBerry Style being a Sprint exclusive, they wanted to do something unique. In the USA, 100 million of the 235+ million phones in customers hands are flip phones.  While I know flip phones may seem a little out of style with our the cutting edge smartphone people out there, Sprint's thought with the Style was to aim this device at the mid-market and go after those who like the form factor. BlackBerry is synomous with a full physical keyboard, so combining that keyboard into a flip phone with the latest BlackBerry OS at an attractive price point and Sprint figures this will be a big hit. With Sprint's $69 unlimited plan, it's not only the up front cost of the BlackBerry Style that is reasonable but also the total cost over the life of the contract term.

From the RIM perspective, the BlackBerry Style falls in line with the current generation of devices on the market. It has that industrial style we've come to expect from RIM and a lot of solid components. The BlackBerry Style rocks the 5 megapixel camera found in the Torch and also has GPS and WiFi. 512MB of internal memory are there to power BlackBerry 6 and a 8GB memory card comes in the box for media. As with other new CDMA BlackBerry Smartphones, the Style also supports Open GL for 3D graphics. I'm looking forward to getting my hands on the Style - apparently it feels nice in the hand (not too heavy) and is a good one to carry around for everyday use.

All said and done, with the BlackBerry Style Sprint has a unique and marketable BlackBerry on their hands that should appeal to a lot of people out there!

TSX:RIM) today announced the much-anticipated BlackBerry Style 9670 smartphone. BlackBerry Style is an elegant, new flip smartphone featuring a full QWERTY BlackBerry keyboard, the new BlackBerry 6 operating system and a wide range of advanced communications and multimedia capabilities. It will be available in the United States only from Sprint beginning on Oct. 31.

The BlackBerry Style features a full QWERTY BlackBerry keyboard that makes email, messaging and real-time chats with BBM (BlackBerry Messenger) incredibly easy. It also comes with many advanced features, including a 5MP camera with flash and support for video recording, built-in GPS for location-based apps and geo-tagging, Wi-Fi for faster connectivity and extended data coverage, and an expandable memory slot for up to 32GB of additional storage.

"The beautiful and compact flip form factor on the BlackBerry Style smartphone makes it quite unique within the BlackBerry lineup," said Fared Adib, vice president - Product Development, Sprint. "Customers will appreciate that the flip form factor is extremely easy to use for calls, and with a full QWERTY keyboard, it provides the same attractive features enthusiasts have come to expect from their smartphone. Also, with the enhancements available through BlackBerry 6, Sprint customers will love the new user interface and the enhanced Web browsing experience."

The attractive new smartphone includes an optical trackpad for fluid navigation and boasts two large displays, an external screen for quickly viewing notifications and messages, and a high-resolution internal display that makes Web browsing or watching videos a pleasure. The BlackBerry Style smartphone will also be available in two fashionable colors - Steel Grey and Royal Purple.

BlackBerry 6 features a redesigned interface that retains the familiar and trusted features that distinguish the BlackBerry brand, while delivering a fresh, approachable and engaging experience that's powerful and easy to use. It includes expanded messaging capabilities with intuitive features to simplify the management of social networking and RSS feeds (Social Feeds) and provides integrated access to BBM, Facebook, Twitter, MySpace and various instant messaging applications that are preinstalled on the BlackBerry Style smartphone.

BlackBerry 6 also integrates a new and rich WebKit-based browser that renders HTML Web pages (as well as HTML email) quickly and beautifully for a great browsing experience. It features tabs for accessing multiple sites simultaneously, mouse-like navigation with the optical trackpad and a zoom feature that intelligently auto-wraps text in a column, while maintaining the placement of a page's key elements for easy viewing and navigation.

Universal search allows users to search through email, messages, contacts, music, videos and more on the smartphone, as well as extend searches to the Internet or to discover applications on BlackBerry App World. The BlackBerry Style also includes a preinstalled YouTube app and Podcasts app.

The BlackBerry Style smartphone will be available nationally on Oct. 31 for $99.99 (after a $100 mail-in rebate) with a new line or eligible upgrade and two-year service agreement with activation on a Sprint® Business Advantage Messaging and Data plan or Everything plan with data. Sprint's industry-leading Everything Data or Business Advantage Messaging and Data plans include unlimited Web, texting and calling on the Nationwide Sprint Network to every mobile in America with Any Mobile, AnytimeSM. Everything Data plans start at $69.99 per month (excluding taxes and surcharges).

With the Sprint Free Guarantee, customers can take advantage of the BlackBerry Style smartphone for 30 days. If not completely satisfied, customers may return the device within 30 days to get reimbursed for the device purchase and activation fee, get both the early termination and restocking fees waived, and receive a full refund for the monthly service plan charges.1

Customers can reserve their smartphone for purchase at www.sprint.com/bbstyle. Customers who reserve the BlackBerry Style smartphone will be able to complete their purchase beginning Sunday, Oct. 31, and must complete their purchase no later than 6 p.m. local time on Monday, Nov. 1. Through the reservation process, customers will be able to reserve their new BlackBerry Style smartphone online, pick it up in a Sprint Store and receive the full retail experience, including Sprint's Ready Now service.

Application developers will have a chance to learn more about BlackBerry 6 at Sprint's 10th annual developer conference. The Sprint Open Developer Conference, Oct. 26-28 in Santa Clara, Calif., is open to all attendees and will feature information on developing applications for a range of platforms, including BlackBerry 6. Developers can register for the conference at http://developer.sprint.com/devcon2010.