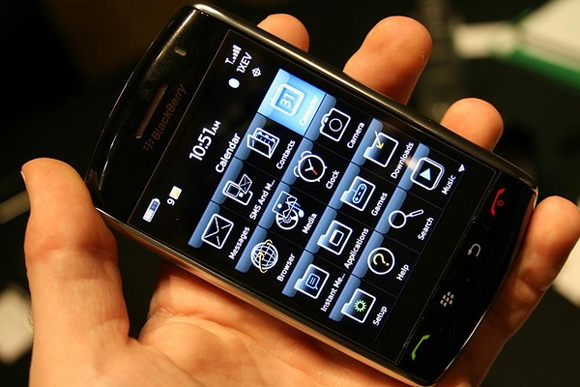 The BlackBerry Storm's official press release crossed the wire at 12:01am on October 8th, and at the same time three hands-on reviews of the BlackBerry Storm went live on the net. As it turns out, there was a special press event in NYC on October 1st where the lucky few in attendance were permitted to get some hands-on time with the Storm and get their embargoed reviews ready for the official launch. I'll just assume somebody at RIM accidentally forgot to send me an invite :-)

I'm not bitter though... just envious! After reading the reviews posted by Engadget, Gizmodo and Phonescoop (Laptop and PCMag have good hands-ons reviews too) I'd just about KILL to get my hands-on a BlackBerry Storm (so if you have happen to have one, watch your back! Seriously... I'm not joking.). Besides, we've been on a hot streak as of late - it's about time the love gets spread around... we were the first to review the Bold, the Pearl Flip and the Javelin (video coming on Thursday once the Wednesday Storm dust settles), and we've had our share of touchscreen firsts too: first to tell you RIM's BlackBerry touchscreen phone would be called the Storm, first to tell you its keyboard would be awesome to type on, first to bring you LIVE pics and just this Monday we even brought news to the world of RIM's new Application Center that will debut on the Storm's OS4.7 (still not sure if it will be there at launch, but we know it's coming). Hmm... maybe there's a reason I wasn't invited?! Somebody at RIM must have guessed an embargo with CrackBerry.com wouldn't last eight hours, nevermind eight days!

Thanks to a blogosphere gone wild with Storm leaks these past few weeks we already knew most of what there is to know about RIM's first touchscreen phone. But marketing shots and device simulator images are never as good as seeing a device and hearing from somebody who has experienced it hands-on, so you definitely have to check out the reviews that have been posted (and browse through the image galleries!). I don't want to take away from any of the awesome review work done here, so after the jump I'll keep it short and just post a couple of quotes, a few images and takeaways and let you read the rest first hand. Enjoy!!

Overall Impressions
It seems the overall hands-on impressions of the BlackBerry Storm have been uber-positive and in alignment with most of the predictions and discussions we have  had about the Storm to date (you'll need to listen to the past few CrackBerry Podcasts to hear all of those). The "ClickThrough" touchscreen takes a divergent approach from other touchscreens on the market, but works well (though it's the kind of thing you're likely either going to love or hate), and especially makes typing on the keyboard an enjoyable experience. At its core the Storm is still very much a BlackBerry especially with the "navigate and click" approach RIM has taken that closely mimics the existing BlackBerry trackball experience. The form factor sounds comfortable, "pocketable" and all toll should still be a device you can use one-handed (HUGE!). And just like the BlackBerry Bold, the display on the Storm is top notch...but of course much bigger!

The Storm isn't 100% perfect though and all of the hands-on reviews fairly touched upon the Storm's weaker points. Here's Engadget's final conclusion:

Carrier (Verizon) and budget (unknown) constraints aside, what it's probably going to boil down to is whether or not the BlackBerry OS is your style. RIM hasn't done an overhaul to make touchscreen viable, instead banking on its navigation / execution paradigm to make the transition to touch -- which for the most part it does brilliantly. RIM hasn't in any way made the phone unattractive to its traditional corporate loyalists, and might just manage to snag other users looking for a flashy phone with decent email, but when it comes to browsing, media playback and other forms of consumer-friendliness, RIM still has a ways to go.

Phonescoop's main nitpick was the browser, which as they point out (and which we know from experience from the BlackBerry Bold) will likely get better with software updates:

There's a lot for both the BlackBerry faithful and news users to like. The innovative tactile touch screen alone will sell quite a few of these. My only major gripe - the browser speed - is definitely the kind of thing that can be - and often is - addressed by a software update. If you're the kind of user who's been tempted by the iPhone, but just can't quit your CrackBerry, your new drug is coming soon to your neighborhood dealer (Verizon dealer, that is.)

And Gizmodo summed it up from a Verizon customers point of view:

This will be the most important phone in Verizon's lineup, and from the looks of it, the best. Some people will hate ClickThrough-it's not a perfect solution, but it's genuinely innovative and really damn good. Some people will hate that it's not the iPhone (or the G1, since it's another tightly integrated hardware/software package). But for BlackBerry users looking for a touchscreen phone, or Verizon customers who don't want to do without the carrier's superior coverage area, this is the best there is.

Capactive touchscreen lights up as your finger touches the glass. Youl need to click on the screen for it to take action as a press.

Entering special characters on the touchscreen.

The "keys" are nice and big. Should be solid for typing accuracy.

Media card is under the battery cover, but is easy to access (ships with 8gb card).

Side by Side with the BlackBerry Curve 8330.

Side by Side with the iPhone

Web browser does a solid job of rendering pages. Still some room for improvement.

Battery doors will be available in different colors. Sweet.

Awesome or what?! Take a read through the reviews and be sure to report back with your reactions, comments, questions, takeaways, etc.

Where's the devil when you need him? I'd seriously sell my soul to get one of these in my hands right now!