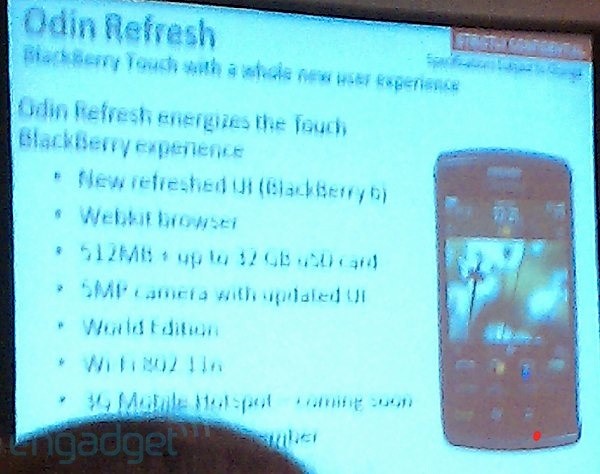 We've been hearing plenty of rumors surrounding the BlackBerry Storm 3. As with all rumors you kind of have to take them all with a grain of salt until those rumors get confirmed one way or another. Today, Engadget posted up the above image for which they were advised was from a training slide that outlines details of the upcoming device. Well, technically the info is for an Odin refresh, which sort of seems like it means Storm 2.5 vs. Storm 3, but you never know how things things will get branded and labeled this far in advance. All in all, it looks to be a minor refresh but, there is a few notables here and one insanely huge one to point out.

Wait, what?!? 3G Mobile Hotspot? Yes, it's noted as a coming soon feature and from the looks of it, the biggest upgrade to the device aside from the normal items that were already assumed or known about. Also, if you'll notice at the bottom of the image the month listed for release ends in "---ember". Previous rumors have put the device on Verizon in time for the holidays, so that still looks to be holding strong. What do you all think?