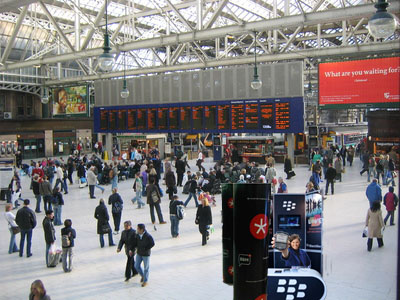 BlackBerry UK has announced that it will be hitting several train stations with BlackBerry stands offering up services to help you get the most out of your device. If you can make it to a stand between 2-3pm you can also be in for a chance of picking up some goodies too, including tickets to see Tinie Tempah and Wretch 32, amongst other special guests. You can also get yourself a free cup of coffee.

The stands will be popping up in train stations around London, Manchester and Leeds, starting Monday 4th July until Tuesday 12th July. It looks like the main focus of these stands are to help customers update their BlackBerry devices. Probably most beneficial for those average Joe consumers who don't hit up sites like our very own CrackBerry, where we have a whole host of BlackBerry 101's to help you update your device's OS. Of course, you can still drop by and try to bag yourself some goodies. I am little disappointed that there will be no stands making their way across the border, it would have been nice for BlackBerry to have at least come to one train station in Glasgow.

Below is a list of the train stations the stands will be visiting: