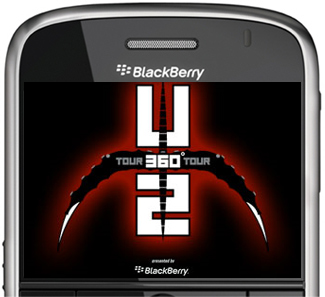 Any U2 fans here in CrackBerry Nation? If so, this announcement may give ya cause for excitement... it was announced at U2.com today that BlackBerry will be sponsoring U2's upcoming 360 Tour. Produced by Live Nation Global Touring, U2 will kick things off in Barcelona on June 30th and visit 14 cities across Europe before jumping over to North America in September. On the topic of the BlackBerry sponsorship, U2's manager Paul McGuiness commented,

"This tour announcement marks the first stage of a relationship and shared vision between RIM and U2 that we expect will lead to new and innovative ways to enhance the mobile music experience on the BlackBerry platform for U2 fans. We look forward to sharing more details as the relationship unfolds."

Coool. If I recall correctly U2 has previously been hooked up with Apple (they had their own iPod) and Dell. I'm sure Rene over at the TheiPhoneBlog will say RIM is getting sloppy thirds, but I like to think of it as the third time being the charm!!