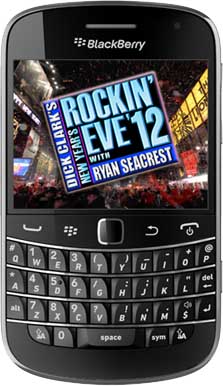 Seriously, where did 2011 go? I know people say it every year, but I swear I blinked and 6 months flew by. The new year is just a few days away, which means everyone is getting set to party like it's 1999. (People still do that, right?) The biggest party of them all takes place in New York City, where since 1972 Dick Clark’s New Year’s Rockin’ Eve has been held (with Ryan Seacrest as co-host since 2005). Along with performances by various singers/performers, the show provides live coverage of the dropping of the Times Square Ball in NYC's Times Square.

This is a big year for the show, as it's the 40th year it's been shown and since it's on a Saturday, the show will run for 5 1/2 hours including pre-show. This year, we are happy to hear that the show is being sponsored by BlackBerry! What better time and place to see the BlackBerry name? A new year, the new #BeBold slogan, and millions of viewers across America tuned in, ready for the fresh start that only a new year can bring. Word on the street is that BlackBerry will be running some Tweets on the big board in Times Square, so stayed tuned for updates on that as well.

How are you celebrating the new year? Will you be home watching Dick Clark’s New Year’s Rockin’ Eve with Ryan Seacrest sponsored by BlackBerry (wow that's a mouthful), or do you have plans to go out? If you're brave enough to actually go to Times Square for the big event, be sure to snap some pictures and send them in!