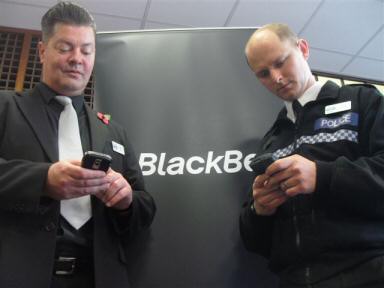 According to RIM, the UK Police force is able to save around £112m a year by using BlackBerry smartphones.

Rory O'Neill, Senior Director of Business Marketing (EMEA) at RIM, spoke to eWeek and stated that one in six officers carry around a BlackBerry and out of the 56 police forces in the UK, 44 of them use BlackBerry technology and applications. The use of BlackBerry smartphones has increased productivity, allowing more police officers to be out in the streets instead of spending time on paperwork. It also allowed them to access or update records on the go from their BlackBerry. O'Neill said they worked close with Bedfordshire Police to work on a mobile data solution that would allow officers to access data from the Police National Computer without using up the radio network.

"There are now a staggering array of applications that enable police forces to do innovative things," said O'Neill. "The police are able to spend more time on the street, and less in the police station. We have created applications that access back-end systems that can perform administrative tasks out on the street. One of the reasons why the police work with BlackBerry is because of the security model."

RIM also cited from a study that said 85% of police officers found that the BlackBerry assisted them in doing their job while 75% that it would be a big deal if the BlackBerry devices were taken away from them.