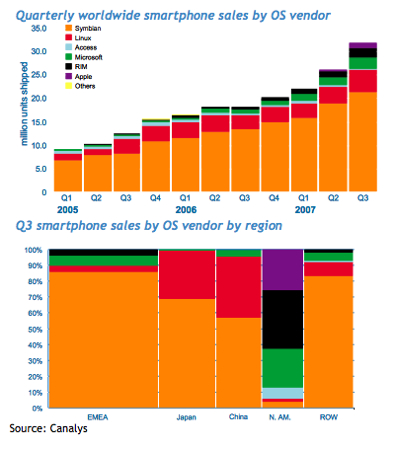 Nice timing on this data. With the Smartphone Round Robin now over and the editor's all having nailed down the Pros and Cons of each device and operating platform, Roughly Drafted has posted a story displaying Quarter 3 Smartphone Sales worldwide (good job guys - I'm sure hundreds of blogs will be sending traffic your way on this one!). While the Round Robin didn't declare an "official winner" (that would be impossible as we each love our own devices the most to declare another "better"), I would say that the BlackBerry Curve wasn't the overwhelming favorite among the other editors. It did get respect though (listen to our Smartphone Round Robin podcast where we debate the issue). But while the participants of the Round Robin are a finickity bunch, it is good to see the numbers declare a winner in North America and that the winner is from the Men in Black...

In North America, RIM holds the #1 position of smartphone sales with its line of BlackBerry smartphones, followed closely by Apple's iPhone. Windows Mobile and Palm trail behind, with Symbian (the overwhelmingly leader in smartphone sales on a worldwide basis) bringing up the rear.

And now for the takeaway...while I'm not surprised that RIM is currently #1, what is surprising impressive is that in only a few months the iPhone has managed to gobble up 27% of US marketshare, and we all know that iPhones are on a LOT of lists to Santa this Christmas season. The iPhone has huge momentum here, and while I do respect/like the iPhone I LOVE my BlackBerry and want to see it stay on top. So RIM... you know the consumer market is where the huge growth lies...I REALLY hope at CES you announce an iPhone killer as I don't want to see us slip to #2.