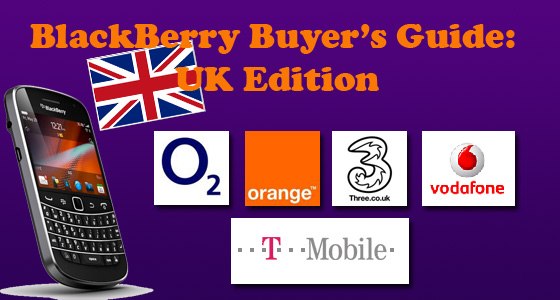 Here in the UK we have the top 5 networks for buying your mobile phone on - O2 UK, Vodafone UK, T-Mobile UK, Orange and Three. Although T-Mobile and Orange trade under an individual name they merged back in July 2010, so a lot of their tariffs end up being very similar if not the same. With a handful of networks it is sometimes hard to know what networks sells which BlackBerry and where the best deal lies. Of course you have Phones 4 U and Carphone Warehouse that deal with all the networks but first off we shall look at BlackBerry devices and tariffs available directly from the networks. The costs shown are for a 24-month contract. For an 18-month contract add £5 to the monthly cost, unless otherwise stated.

The above prices are for O2's medium data plans that are either 500MB or 750MB per month. You can get a maximum of 1GB data per month paying adding about £4 on top of the above monthly prices.

For more information on BlackBerry deals on O2

Vodafone have lower plans available too for the Curve models, you can visit the Vodafone website for more details on those.

For more information on BlackBerry deals on Vodafone

Three UK have jiggled their price plans lately and while The One Plan is still available, two other plans have been introduced - Ultimate Internet plan and Essential Internet plan. All plans give you 5000 texts. The One Plan includes an extra 5000 mins to call other Three UK mobile numbers. It is also a bit more complicated in the fact that, depending on what device you get, you can pay more or less for the same plan. The table above is slightly different from the other tables due to this reason but it gives you an idea.

For more information on BlackBerry deals on Three

For more information on BlackBerry deals on Orange

For more information on BlackBerry deals on T-Mobile

Don't forget we have our international forums where you can interact with other members for more information. If you're new to BlackBerry then you may also want to check out our BlackBerry 101 section for tips, tricks and how-to guides.

Check out the BlackBerry Buyer's Guide: UK Edition (Part 2)
Hit the International Forums for more discussion
Check out all of our BlackBerry 101 articles