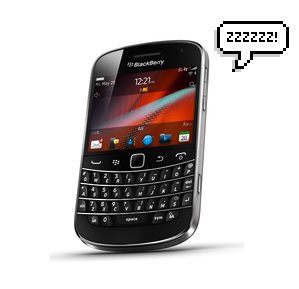 Another Update: You can stay on top of official service updates from RIM/BlackBerry here. The latest from RIM is as follows:

Wednesday 12th October - 9:45 (GMT-5) BlackBerry subscribers in the Americas may be experiencing intermittent service delays this morning. We are working to resolve the situation as quickly as possible and we apologize to our customers for any inconvenience. We will provide a further update as soon as more information is available.

If you're killing time waiting, be sure to check out our BlackBerry Service Outage Sale.

Update [7:30am ET] from Kevin: Well this just SUCKS. Apparently things are getting worse before they get better. Waking up in Canada this morning my BlackBerry services are still down (lost service last night). No updated message from RIM yet on on what's going on. Looking at some tweets from BES Admin friends, we're hearing as of two hours ago that "Limited service expected for at least another 8 hours for BIS and BES Email, no word on BBM, BISB and Push API." Hopefully we'll get an update from RIM this morning and things will be back to normal SOON.

Update [4:42p EST]: While services seem to still be down, RIM had this to say on their Facebook page:

The messaging and browsing delays being experienced by BlackBerry users in Europe, the Middle East, Africa, India, Brazil, Chile and Argentina were caused by a core switch failure within RIM's infrastructure. Although the system is designed to failover to a back-up switch, the failover did not function as previously tested. As a result, a large backlog of data was generated, and we are now working to clear that backlog and restore normal service as quickly as possible. We apologize for any inconvenience, and we will continue to keep you informed.

Following yesterday's crippling outage in Europe, Middle East and Africa, it seems that the BlackBerry Internet Service may be down again. Although service did resume late last night, there have been signs that the service is down again already today. I for one have not received any emails on my BlackBerry in the past few hours and BBM messages are not going through at this time either.

Are you in the EMEA region and currently having BIS problems yet again? Hit us up in the comments and let us know where you stand. Hopefully today's outage will not last as long as yesterday's one -- we'll be sure to keep you updated if we find out more.