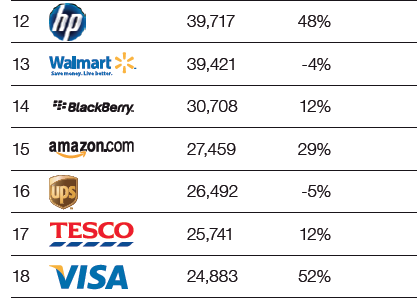 The BlackBerry brand has moved up a few notches on this year's BrandZ Top 100 report. The BrandZ list ranks the value of the top brands in the world. In 2009, BlackBerry came in at number 16 on the list, but this year took a bit of a jump to the 14th spot. Unfortunately the increase isn't nearly as big as last year (100% in 2009 vs. 12% in 2010) but its good to see BlackBerry still moving up. Apple jumped from number 6 to number 3 (a 32% change) while Nokia nearly dropped dead from the 13th spot in 2009 to 43rd in 2010. When broken down, BlackBerry ranks 6th among all technology brands, trailing Google, Apple, IBM, Microsoft and HP. While its good to see the BlackBerry brand moving up, its not a surprise that the increase isn't nearly as big as in past years - it gets tougher to climb as you near the top. Sure would be awesome to see BlackBerry crack the top ten one year soon though. As they continue to grow around the world, it might just happen. Check the link below for the full BrandZ Top 100 report.