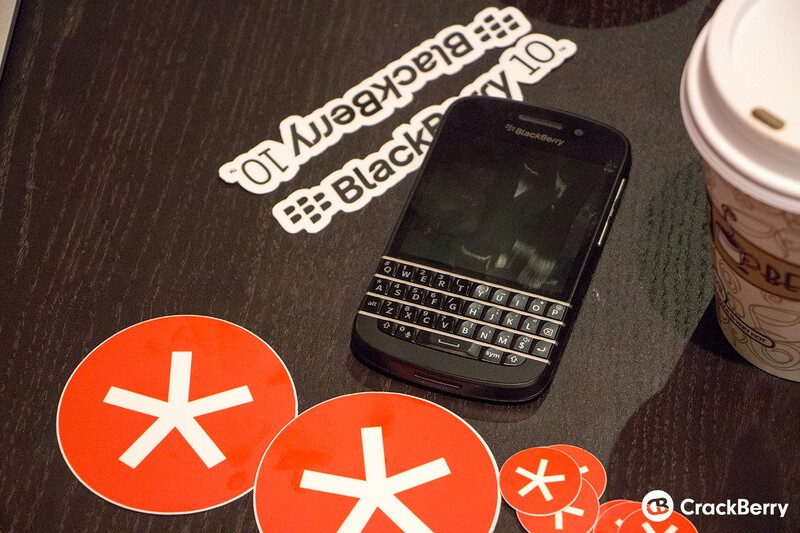 We've been covering conferences for years. It's always a challenge to sort out just what gear to bring to a show. Extra cables, power cords, cameras and especially what device to use. We're BlackBerry addicts and keep bigger stash of devices than the average consumer, so there's always a choice as to what device to use at a conference. Heading into BlackBerry Live last year the obvious choice was the Bold 9900 which did an amazing job, but also burned through batteries (so much that BlackBerry had a battery swap station set up to trade out your dead batteries). This year though, things would be different.

Perhaps more than anyone on the CB team, I was super excited to get my hands on a Q10. I love my Z10 but I really am a keyboard guy at heart and I knew that going into a conference as big as BlackBerry Live I'd want a keyboard as my copilot.

Now I'm not saying that the Z10 isn't a "conference device" - heck, they were even given out to every BlackBerry Live attendee. Just that being able to stretch a battery as far as possible and also being able to pump out messages crazy fast are big concerns at a conference like BlackBerry Live. For that, the Q10 is a machine and that's just what we needed. I was a bit worried that the Q10 wouldn't launch at all before we headed to Orlando, but thankfully it made it just in time to be in my hands before I left The Garden State for some much need sunshine.

While I knew that I would arrive in Orlando with a Q10 in hand, I was surprised to see that the majority of the CB team were using a Q10 as well. For the most part we were all Z10 users leading up to the conference. Kevin had been dual-wielding a Z10 and Q10, I had just recently switched and Bla1ze had done the same. Simon, James, James and Marcus all arrived with charged up Q10's as well. It was an awesome sight to see.

Conferences are the ultimate test of devices. You run batteries longer, typically get more emails and BBMs (we got plenty thanks to our CrackBerry Live show). Use groups more, take lots of photos, use Twitter more and make more phone calls or BBM Video chats back home. It really is a test of endurance for our devices.

So why the Q10? Well for starters, as we proved over the course of the week, battery life is nuts. We'd all plug in to charge a few times here and there during the day, but most times we were just on the go non-stop. I'm ecstatic to say that I never lost a battery the entire time in Orlando. I was up every day before 7 and we didn't head to bed until close to midnight most days. Kevin (who obviously uses his devices a bit more than me) first killed a battery around 10pm on Tuesday, then again on Thursday, but no one else managed to kill one off. A few of us even had the Q10 Battery Charging Bundle at the ready but never had to pull it out, and that says a lot.

For messaging the Q10 held strong as well. For me, it was always about being able to pull out my device and pound out a quick message on the run. With a touchscreen I feel that it's harder at times to do that, making the Q10 the top choice here. The Z10 has the best virtual keyboard around but there is nothing like have the feedback of a physical keyboard. I love the feeling of pulling my device out of my pocket, cranking out a quick message then going about my business. For me, I find that much easier to do on the Q10 as opposed to the Z10.

Overall there are no complaints from our end as far as the endurance of the BlackBerry Q10 at an event like BlackBerry Live. Everything was solid from head to toe and kept us going strong for the entire week. No more dead batteries, hourglassing, OS lag from BBM groups - everything just worked and it worked well. This is honestly one of the first conference trips where I've had no issue with my device of choice and I couldn't be happier.

I'm not sure what device everyone else is using back home now, but I'll be sticking with the Q10, that's for sure.

The BlackBerry Q10 is conference tested and blogger approved.