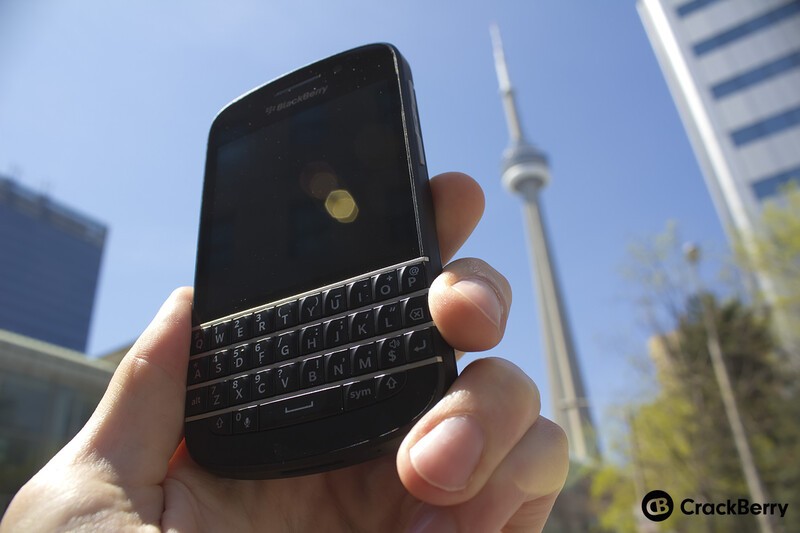 The BlackBerry Q10 is now in stores across Canada, and we’ve cracked open boxes from Rogers, Bell, and TELUS. The device doesn’t change much from carrier to carrier (unless a white paint job is a big deal to you), but what really matters here is the service and how much it costs.

We’ve broken down what you’ll be looking at when buying a Q10 in the UK, so let’s do the same for Canada. First off: no matter where you get it from The Big Three, it’ll be $199 on a three-year agreement to spend at least $50/month, or $699 to get it outright.

Keep in mind that all three work on what’s effectively a pro-rated early termination fee now. It used to be that if you cut your contract early, it was more or less a flat fee based on how many months you had left on your contract, capping out at around $400. Now the subsidy you take on your phone is factored in with how long you have left on your contract. Rogers calls this system FLEXtab, TELUS calls it Device Balance, and Bell calls it Data Service Agreement Price Adjustment. Basically, if you get $600 off the price of your phone, and you want to cancel after two years, you owe $200. In the Q10’s case, you’re getting $500 off initially for the device, so It would be about $167 to get out of your contract a year early.

The tab system is very similar, except it takes into account your monthly rate more specifically. With that, WIND, Bell’s Virgin Mobile, TELUS’ Koodo, and Rogers’ Fido brands apply credit to your device balance equal to 10% of your bill every month to your device balance. You pick how much of a subsidy you want on the up-front cost of the device, and whenever you want to leave, you just pay up whatever’s left on the tab. With this system, you can get $150 off with Koodo, $300 off with Fido, or $500 off with Virgin. Eventually, WIND will be able to get you $300 off the Q10 cost.

With all of the above you’ll have the option to buy your device outright for $700 if you don’t want to be tied down to a contract, or $650 if you’re willing to go month-to-month. They may limit you to buying only one Q10 outright, though.

So, with all of that out of the way, let’s drill down into the plans and coverage, carrier by carrier. All of the plans listed here from Bell, Rogers, and TELUS have unlimited nationwide texting, call display and voice mail.

Rogers is the big boy on the block. They’ve got the best coverage, a limited-time exclusive on the white Q10, and the Q10 is one of only a few of their phones to take advantage of 2600 MHz LTE, which apparently offers speeds up to 150 Mbps. They've even got some tailored-made services for the Q10 which seem to be working well. Keep in mind that you’ll have to make sure you get the Q10 with the model number SQN100-3 to take advantage of those speeds. Even then, it might not be worthwhile to snag one if you travel to the U.S. a lot, since LTE down there doesn’t operate on that band. Luckily, Rogers is also selling the more roamer-friendly SQN100-1 model as well.

Buy the Rogers BlackBerry Q10 here for $199 on contract

Bell is currently knocking off $10 from their $55 plan as a Q10 exclusive, which is nice. Don’t worry, the minimum $50 plan restriction we talked about earlier for three-year contract is waived for the promotion. As for coverage, you’ll see that there are a few areas where Bell reaches that others don’t, namely up north.

Though Bell has the same kind of 150 Mbps LTE  as Rogers in the Greater Toronto Area, Cambridge, and Kitchener-Waterloo, Bell isn’t selling the SQL-100-3 (or any other Q10 compatible with 2600 Mhz). Still, I’d love to unlock a Rogers one and see if you got similar speeds with a Bell LTE SIM.

Buy the Bell BlackBerry Q10 here for $199 on contract

I've always been a big fan of TELUS, mainly because among The Big Three, I find it's easiest getting plan information from them. Also, the cute branding and nice-looking stores help too. You can see from the coverage map that the Ontario corridor is well covered, as well as the maritimes. Alberta's also looking pretty good, and it looks like there's even some decent service in the Northwest Territories. I've generally been happy with the speeds I get on TELUS, though I haven't spent too much time on their LTE.

Coverage aside, there's not much else to the TELUS Q10 offering - no preloads, no on-device branding, just the straight goods. Even the plans line up pretty closely to what Rogers is offering.

Buy the TELUS BlackBerry Q10 here for $199 on contract

Now, WIND doesn’t actually have the Q10 for sale yet, but they’ve announced it and it’s coming. Personally, I’d hold out on getting a Q10 until they get their turn at stock, because these plans are hard to beat. You’ll be taking a hit in a few other departments, of course. For one, even with the aforementioned WINDtab, it’ll still be a slightly beefy up-front cost. Secondly, you won’t get LTE. Third, coverage is limited to larger urban centers before you’ve got to pay for roaming (the rates for which are admittedly reasonable).

Even within coverage zones, the nature of using the AWS spectrum means you aren’t going to get as good indoor coverage as the other guys. The big pull with WIND is the unlimited data. They’ll throttle you at 6 GB, but even then, if you’re not in a busy part of town, you can blow well past that before getting a throttle warning.

Oh, and Sasktel has it too. That’s a tour of how you can pick up a BlackBerry Q10 in Canada. Maybe the other smaller carriers like Mobilicity, MTS, and Videotron will pick it up eventually, but this is what we’ve got so far.  Canadians, where are you going to get your BlackBerry Q10? Is there anything here about the carriers that would sway you one way or the other? How about some hidden perks that folks might not know about?