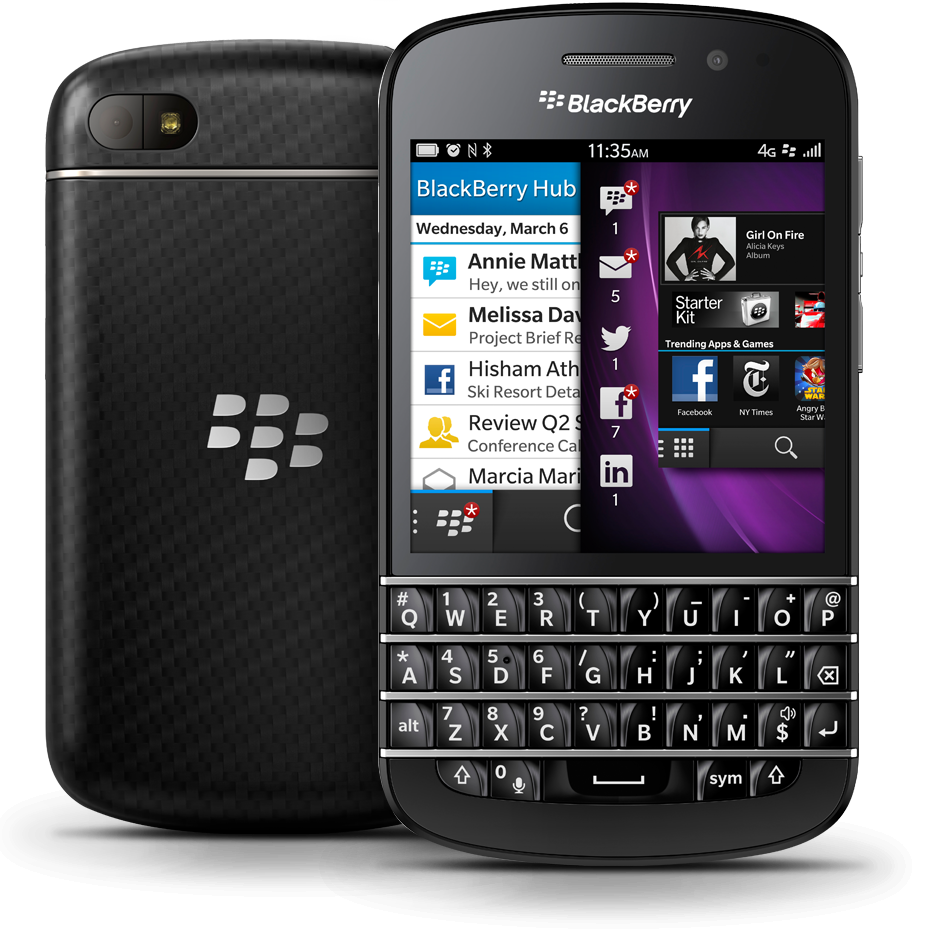 Arguably, the most significant feature of the BlackBerry Z10 is the operating system. Though the primary focus on communication hasn’t changed in the software experience, the user interface has moved from one that relies on physical buttons to gestures. The most important one is the quarter-turn swipe from the bottom frame to the right frame to access the Hub. This is where notifications from all sources are unified in one place where users can respond and otherwise interact with them. Swiping up from the bottom returns users to the Active Frame screen, where minimized version of all running applications are visible, while menus can be opened by swiping from the top pane or long-pressing on individual items for context-sensitive actions.

The virtual keyboard for BlackBerry 10 uses a prediction engine powered by SwiftKey which makes suggestions based on personalized usage on a per-app basis. Suggested words appear above the next letter on the keyboard, and are picked by swiping up from that key. The camera software includes a new TimeShift function which shoots a fast burst of photos, and allows users to selectively edit individual faces to different shots taken in that burst to effectively create a moment that never really existed.

Are you still using a BlackBerry Q10 on Sprint and haven't updated to 10.3.2 manually out of frustration yet? If so, we have some good news for you. The carrier is now pushing 10.3.2.2813 officially.

Select BlackBerry 10 smartphones now over 20% off

Have you been holding out for a sale to pick up a brand new cobalt blue BlackBerry Classic? Perhaps you have had your eyes on a white BlackBerry Leap? If so, now just might be the moment you have been waiting for as BlackBerry has placed select devices on sale for over 20% off from now until September 1st. Canada France Germany Italy Netherlands Spain UK US As BlackBerry notes,...

What started back in mid-June with Verizon rolling out BlackBerry 10.3.2 to the BlackBerry Classic, has now extended into devices such as the BlackBerry Q10, BlackBerry Z10 and BlackBerry Z30. Verizon customers on any of those devices can now go ahead and check for updates where you should find OS 10.3.2.858 (Software version 10.3.2.556) available for download if you've not already...

Adding to the small bevy of updates that were pushed out yesterday for several devices, TELUS has now started pushing out OS 10.3.1.2708 (Software version 10.3.1.1865) to multiple BlackBerry 10 devices such as the Passport, Z10, Q10, Z30 and Classic as well. Much like yesterday's release, this OS has been around in leaked and official form for quite some time now for ShopBlackBerry...

How to check which Carrier lock and get an unlock code?

Can't wait to try that out, thanks! Soon as I find a paperclip.

Save 15% on all BlackBerry Accessories

It's time to gear up and buckle down for this weekend's big game! No matter what team you're rooting for this year, we can all agree that 15% off all accessories here at ShopCrackBerry is a pretty sweet deal. We've got cases, chargers, batteries, etc. for the hottest BlackBerry devices including the BlackBerry Passport, BlackBerry Classic, BlackBerry Z10, Blackberry Z30, BlackBerry Q10...

We're wrapping up 2014 by extending a 20% savings on all BlackBerry accessories until midnight December 31! With plenty of new products to choose from for popular devices like the BlackBerry Passport, BlackBerry Z10, BlackBerry Classic and BlackBerry Q10, you can definitely get the best bang for your buck before the new year kicks off. To receive 20% off your entire cart, use coupon...

20% off all BlackBerry Accessories

We're taking the holiday rush into consideration this year and offering you last minute shoppers 20% off our entire selection of accessories here at ShopCrackBerry. That means cases, chargers, batteries, Bluetooth and anything else you can find to stuff your stockings with! With popular devices like the BlackBerry Passport, BlackBerry Z10, BlackBerry Q10 and the BlackBerry Z30 flying...

Free Charger with any Order!

You might have noticed that we've been throwing some pretty sweet discounts your way the last few days or so. Well, we've got another little treat for anyone who places an order today. Whether it's a case for your BlackBerry Z10 or a pack of screen protectors for your BlackBerry Passport, you'll receive a Griffin USB car charger with your order—absolutely free. That is of course, while...

Assistance with getting a Q-10 up and &quot;functional&quot;.

Ok people I am obviously looking for help. There are a few threads that almost cover the issue I have. The closest one was locked and it, as the others, do NOT help or work for me.

T-Mobile BlackBerry Q10s available for only $250!

While the spat earlier this year between BlackBerry CEO, John Chen and T-Mobile CEO, John Legere, made for some tabloid-like headlines and deals for consumers on both sides in the short-term, since then it has ultimately left a lot of corporate customers in a lurch. With BlackBerry and T-Mobile US putting an end to their licensing agreement, companies that want to remain on T-Mobile and...

If you own a BlackBerry Q10 and are on Sprint, you'll want to go ahead and check for software updates. Reports from the CrackBerry Forums and notice on the Sprint website indicate the carrier has started pushing out OS 10.2.1.3023 for the BlackBerry Q10. While many folks are still going through the changes in the forums, according to the Sprint documentation, here's what you can expect...

Getting ready for the BlackBerry Passport

Giving up my Q10 for a Z30 until the Passport arrives!

For regular CrackBerry readers you'll have more than likely noticed that I've been using the BlackBerry Q10 as my primary device for quite some time. Sure, I switched over to the Z30 when it was released but I soon missed my physical keyboard, so I went back the Q10 and I then just used the Z30 as my second device - mainly for app and game reviews. Considering the BlackBerry Passport...

Devs: Update your apps for the BlackBerry Passport!

Just as we've seen with previous device releases, BlackBerry has now started sending out emails to developers to let them know if they have a BlackBerry Q10 app in BlackBerry World, that app will automatically be listed as compatible for the upcoming BlackBerry Passport. Developers have the option of just allowing it to go through or if they feel as though testing on the app should be...

On top of being the hugely functional devices we know and love, the BlackBerry Q10, BlackBerry Q5, and BlackBerry Z30 are also earning accolades for design. All three just won Red Dot Awards when faced with a pool of over 4,800 entrants and a panel of 40 design experts judging every aspect of the products. BlackBerry won the same award for the BlackBerry Z10 last year. Brian Paschke...

How can I restart or reboot my phone BB Q10 since my power button is broken?

Press and hold both volume buttons simultaneously for a few seconds.