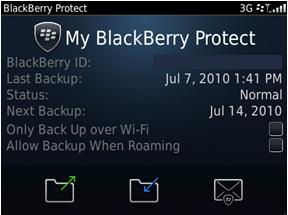 Whether a big innovation or small, we tend to always get hyped up at CrackBerry.com when Research In Motion introduces a new product or service to BlackBerry users (what can we say.. we love BlackBerrys!). Today's official word of the coming of BlackBerry Protect, which will be available in limited beta later this week and open beta later this year via the App World test center, is totally deserving of some genuine excitement. BlackBerry Protect is a free service offering from RIM that allows BlackBerry smartphone customers to remotely backup, restore and locate their BlackBerry smartphone, from wherever they are via their destkop computer. CrackBerry readers will be familiar with SmrtGuard, an application we've raved about here since it was still in beta... you can think of BlackBerry Protect as free RIM-built version that mainly accomplishes the same things. Key BlackBerry Protect features include:

I had a chance to get a sneak peek of BlackBerry Protect and and am definitely happy to see RIM bring this service offering to its (consumer/BIS) customers for FREE of charge. Bottom line is it works as advertised and as you'd expect - the features/capabilities of BlackBerry Protect sort of speak for themselves. While the OTA backup and restore features are nice (would have love to have had these for a long time now), it's the remote device management that will make you say THANK YOU RIM if and when you ever have to use it (like if you ever misplace your device). Definitely another compelling reason to be a BlackBerry owner. Keep reading for some more images and details!

BlackBerry Protect Preview and Walk Through

BlackBerry Protect is comprised of two parts that work together to provide the total experience: an on-device BlackBerry application that runs in the background where you can modify settings, and a dedicated web-portal where you can login to manage the remote features.

Hard to argue with all of the above when the price is right, right? All in all I think the BlackBerry Protect service is a more than welcome addition to what BlackBerry already has to offer. To existing BlackBerry owners it's a no brainer to put it to work, and for those looking at making their first smartphone purchase it's another compelling reason to go BlackBerry. One thing I'd still love to see the BlackBerry platform offer (be it via BlackBerry Protect, a third party app, or via all app devs themselves) is the ability for individual third party BlackBerry application settings to be backup up. When you customize app settings (something like BerryBuzz for example) it sucks to have to upgrade your OS or switch over to a new device as you lose all those settings. Or even more basic is the example of a BlackBerry theme. Once you get all of your homescreen folders setup and icons placed in the order you want, there's currently no way to save that theme setup. Switching to a different theme forces you to start fresh, as does switching to a different device. Mega annoying and something I'd love to have the ability to backup and restore.

BlackBerry Protect aside, what also excites me here is that this is all a strong indicator of where RIM is going. We saw RIM introduce remote backup of contacts with BlackBerry Messenger 5.0, and now with App World 2.0 and BlackBerry Protect RIM is tying this in-the-cloud storage with to the new BlackBerry ID account system, which really starts to make things less messy as a BlackBerry owner. We all know the way Apple works their magic with iTunes and the iTunes account. BlackBerry ID is RIM's way of bringing everything BlackBerry together for a customer, and hopefully they will quickly build on this with more service offerings that take advantage of it and the cloud (on investors calls RIM's Co-CEO Jim Balsillie has mentioned many times that RIM is going to be doing big things in media). I guess time will tell!

Stay tuned to CrackBerry.com for more BlackBerry Protect information and details. We'll let you know more on its public availability as we hear it. In the meantime, we hope you're liking what you see!