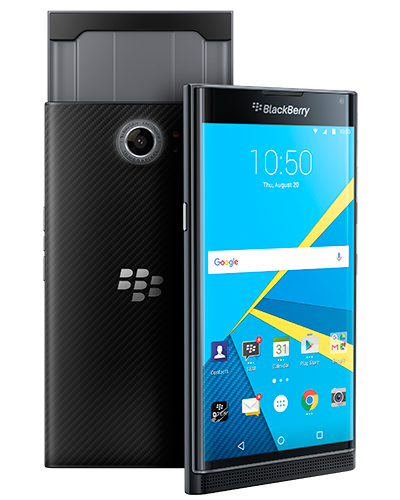 First shown off at Mobile World Congress in Barcelona, the BlackBerry Priv — Priv standing for Privacy and Privilege — is a new BlackBerry device from the manufacturer of the same name, featuring a slide-out portrait keyboard and running Google's Android OS (in this case 5.1.1 Lollipop) — the first device from BlackBerry to do so.

The BlackBerry Priv has all of the leading specs for a high-end Android phone in 2015 — a Snapdragon 808 processor, 3GB of RAM, 32GB of storage, a 5.4-inch curved 2560x1440 touchscreen and a slider-style keyboard along with an 18MP camera on the back. BlackBerry has left Android looking rather similar to what you'd expect from the software on a Nexus, but has deeply integrated its own services and make a few tweaks to the interface. It has also integrated several security features to make the Priv presumably one of the more secure Android devices available today.

The BlackBerry Hub is still present on the Priv, as are some key BlackBerry features like those familiar notifications. The slide-out four row keyboard features not only physical keys for typing, but also touch gestures like scrolling, choosing predicitive text and even double-tapping to enter a cursor edit mode.

The Priv launches at a very premium price of $699, which puts it in competition with the highest of the high-end Android phones. It's available unlocked directly from BlackBerry, but also from AT&T in the U.S. and a variety of carriers in Canada and retailers in the UK.

The PRIV by BlackBerry is available to order now.

Verizon now rolling out software update for the BlackBerry Priv

Have a BlackBerry Priv on Verizon? Surprise! You'll want to go ahead and check for updates as many folks have now started receiving a software update.

To go along with the seemingly random rollout of a new BlackBerry 10 OS build, BlackBerry has also pushed out a new update for BlackBerry Priv owners.

A new post on the Inside BlackBerry Blog from Alex Thurber has laid out the status of monthly updates for the Priv as the device has now moved well beyond the two years of monthly software updates BlackBerry originally committed to.

That's astounding, really is. I read a recent review of a current flagship phone saying it was approaching the level of a cheaper DSLR!

This is just a quick heads up to let you all know there's a new BlackBerry Hub update now available on Google Play. The changes here are small and just meant to align with the latest BlackBerry Hub+ Services update.

Get the latest update!

A new BlackBerry Hub+ Services update has landed on Google Play and is now ready for download. This release highlights a few important fixes for those experiencing battery drain, crashes on Android Oreo and more!

BlackBerry Priv announced two years ago today, are you still using it?

How on earth do you disable Google?

BlackBerry confirms Priv will not get Android Nougat

As detailed by Alex Thurber in a recent podcast interview the BlackBerry Priv will not be updated to Android 7 Nougat, and the DTEK series may also find a similar fate.

How to disable the BlackBerry Keyboard app extensions

Want to disable the BlackBerry Keyboard app extensions? It can be done and we'll show you how!

The last major update to the BlackBerry Keyboard app brought plenty of new features but the latest update rolling out concentrates purely on minor enhancements and stability fixes.

I've been trying to solve this same issue since early January, and ripping my hair out over spending hours on the phone with Verizon talking to people who really didn't have any idea what was...

Although it hasn't been noted by @BBSIRT yet, BlackBerry has now begun the rollout of the September Android security update according to a new post on the BlackBerry Knowledge Base.

Verizon has now begun sending out software AAN368 which is noted to have been tested to optimize device performance, resolve known issues and apply the latest security patches.

Initially announced at Google I/O, Google has now begun rolling out their new security system, Google Play Protect, on any phone with the latest version of Google Play Services.

On a side note this speaker is still solid. Had it on a shelf at max volume while I gave a bath to my 5 year old, and w/ out the shower running it was almost deafening. I literally had trouble hearing...

Taking on styling from BlackBerry 10, Keyboard File for Android allows you to enjoy the benefits of a physical keyboard for file management on your BlackBerry Priv or KEYone by integrating multiple keyboard shortcuts.

The latest updates for BlackBerry Hub have now started rolling out through Google Play and this release is pretty huge for integrations being added.

Keeping updates on schedule, the BlackBerry Security Incident Response Team has now announced they have begun the rollout of the June Android security update for BlackBerry smartphones.

Where will I get the drivers for the physical keyboard?