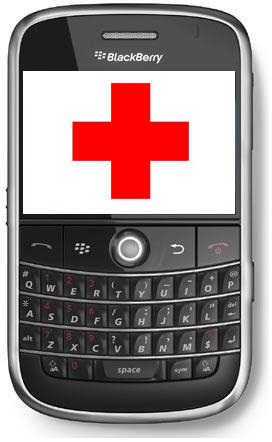 We have all heard stories before of mobile devices saving lives, but this one adds an extra twist especially if you have ever complained about the size of your BlackBerry device. David Fitzherbert was off skiing in the Matterhorn and Monterosa peaks in Switzerland when all of a sudden the snow beneath him gave away and he fell and got wedged between two rocks. The only thing that saved him from totally sliding through the rocks was the fact he had his BlackBerry in his breast pocket and the thickness of the device was just enough to hold him in place.

Luckily, aside from having his BlackBerry is his pocket, David had a mountain guide with him who was able to place a distress call to the mountain rescue team. David didn't walk away totally unscathed though - he did break his jaw, smashed several teeth and even had to have his nose surgically reattached by surgeons. One thing that did escape just fine though was David's BlackBerry to which he promptly used to call and inform his wife of his condition. Needless to say, after hearing this story I will never complain about the size of my BlackBerry again... that bit of extra bulk could be a life saver. Thanks to everyone who sent this in!