How to Properly Size Custom Wallpapers for the BlackBerry PlayBook 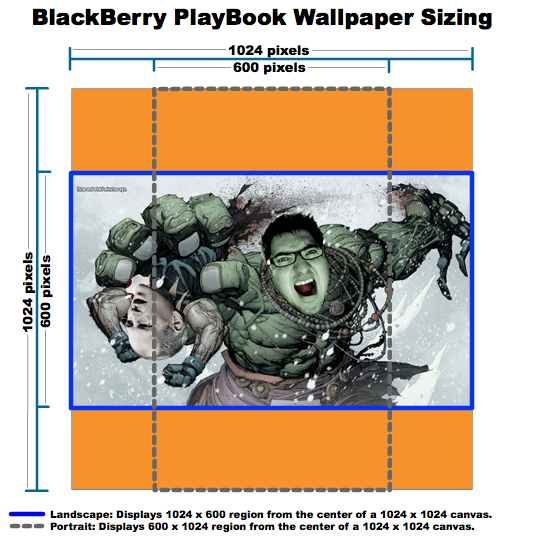 One of the slightly confusing things about the BlackBerry PlayBook is the way it displays wallpapers on the homescreen. Knowing that the landscape resolution of the PlayBook is 1024 pixels wide by 600 pixels tall, you'd think a 1024 x 600 wallpaper would display perfectly on the device in landscape and get scaled down in portait to fit the width (and show bars above/below), but  currently that's not the case. Instead, right now if you set a 1024x600 sized image to be the homescreen wallpaper, you'll find the image you get on the homescreen in landscape is sort of zoomed in and cut off, as if it's been scaled up. That's because it has been scaled up. Keep reading for the explanation and how to.

The reason for this is that the wallpaper canvas that the PlayBook currently utilizes is actually 1024 x 1024 pixels, which is the max width and height of the wallpaper in both landscape and portrait rotations. In landscape, the displayed portion is the 1024x600 region centered in in the 1024x1024 canvas. And in portrait, you see the centered 600x1024 region of the 1024x1024 canvas.

So if you want to make a custom wallpaper that looks perfect on the homescreen in landscape orientation, you'll need to size the desired image you want displayed on the homescreen to 1024x600 pixels and then extend the canvas on either side up to 1024, so that the actual full size of the wallpaper is 1024x1024. In landscape the image will fit the homescreen perfectly. When rotated you'll lose some of the image from left to right and see your canvas on the top and bottom, but at least for landscape you're good to go. The image above that explains exactly what you'll see of the 1024x1024 canvas in either orientation. The image in the middle is 1024x600, set on a 1024x1024 canvas.

Since landscape is the orientation used the majority of the time on the PlayBook when on the homescreen and navigating, I'm hoping RIM will tweak up the way it handles wallpapers. Personally I think it would make more sense to be able to use a 1024x600 image as a wallpaper, which would display perfectly on the homescreen, and from there when rotated into portrait that image would be scaled down to the 600 width (no image cut off) and then black borders would be placed above/below the image to fill in the remaining space.

If you need some extra help making your own wallpapers for the BlackBerry PlayBook, be sure to check out this thread in the CrackBerry forums. Included is a PSD file for Photoshop that will show you just how your wallpaper will display.