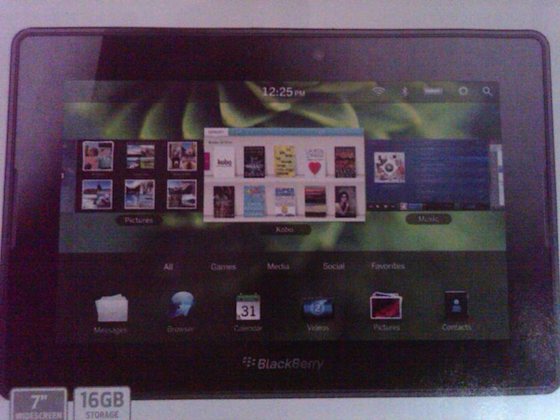 Update: It looks like this may be an old image after all. It does make sense since the Tablet OS v.2 should be moving away from the multiple panels format and more towards user created folders. Kevin touched on this a while back and said the new OS will most likely be more iOS like in that you can create your own folders and group apps along with other changes. So unfortunately this may not be one to drool over, but hopefully some real screens of v2.0 will turn up before long.

Hot off the RIM earnings call last night where Jim Balsille spilled the beans on the PlayBook Tablet OS v2.0 details, forums member CB.Mike-D posted up this pic of a BlackBerry PlayBook from a Best Buy catalog. If you inspect the image closely you'll notice a few key elements of the screen that aren't quite right. The image here does indeed show the Tablet OS on the PlayBook, but it's not the current incarnation that we know. The Photos and Videos icons are a bit different than what we have now and there is also a search icon in the top right corner. Both a Messages and Calendar icon are present, however there is no BlackBerry Bridge panel, so this could be the native clients. Also there are both a Social and Favorites panel that aren't in the current OS. Sooooo .... what do it all mean? It could possibly be v2.0 of the Tablet OS, or it could just be a big mix up. It doesn't look much like a Photoshop screw up, so we're thinking it's a good possibility that it's an early screen of what we can expect when v2.0 sees the light of day. Good job Best Buy ... we know you're holding out on us so lets see some more ;-)