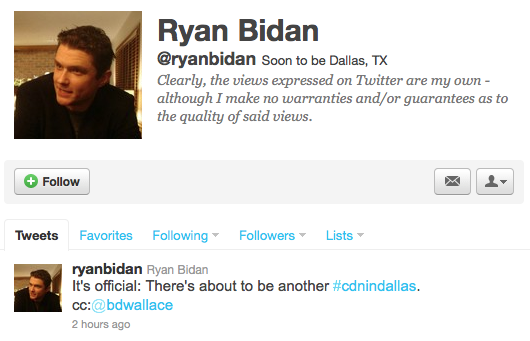 Wow. Another RIM employee has left for Samsung.  Just a month after Brian Wallace, the VP of Digital Marketing and Media for RIM, left for Samsung, another well-known RIM employee is packing up and leaving Waterloo for Dallas, Texas. Note, this addition comes less than two weeks after Samsung chief product and technology officer Omar Khan left for a job with Citigroup, so it seems things be changing like crazy here.

Ryan Bidan, formerly a Senior Product Manager on the BlackBerry PlayBook team, posted on his Twitter and LinkedIn today that he's now going to be working for Samsung Telecommunications USA as a Director of Product Marketing. Ryan Bidan was well known here on CrackBerry as he was one of the company's best personalities in dealing with the media. He first hit the CrackBerry blogs when he showed us the BlackBerry Presenter at CES 2010, and then from there he moved onto the PlayBook team where he made the rounds in the media (remember my first hands-on of the PlayBook?), including being on an episode of the Engadget show. Heck, there's even a thread in the CrackBerry forums calling for Ryan Bidan to be Research In Motion's new CEO.

We've tweeted out to Ryan for feedback, and Phil is waiting for word back from Samsung on this movement. Let's hope this isn't a trend.. if Samsung keeps poaching RIM talent CrackBerry Kevin may have to do a Hulk Smash.

Sad to see you leave RIM Ryan... I hope Samsung bloggers appreciate the Bidan smirk as much as I always did (he pulls out the trademarked smirk everytime you ask him a question he's not allowed to answer).