Now that the BlackBerry Playbook is out in the open, we're all waiting for more. We know the specs are insane and that it will run Adobe Air and Flash (among other things) but from there on out we're in the dark. We want to know more (don't we always) like what specific apps it will run and what other fun stuff it will do -- did anyone else spot Tweet Deck in there??. We decided to break down the BlackBerry Playbook promo video with our thoughts on what the PlayBook will do, what apps it will run and more. Keep reading for our full examination.

First off a recap of the specifications we already know:

We also know (from seeing the PlayBook live and in color) that there is something else on the front of the device that could be either an LED or maybe some sort of proximity sensor. There are a few ports for USB and HDMI as well as media buttons on the side. We also know some bits and pieces like the fact that you will be able to use the HDMI out port to view video on an external device and view something totally different on the PlayBook at the same time. Great for things like presentations where you can show something on a large screen, and view your notes right on the PlayBook.

So lets get going and tear this video up and find out what will make the PlayBook do its thing. 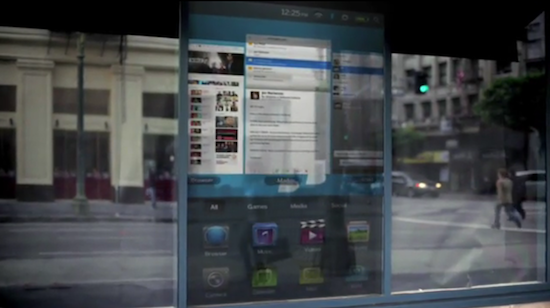 0:23 - Here we see the start of some multitasking. It looks almost like a webOS-esque card style switcher. The open apps (?) are shown on top while the standard app icons are down the bottom.

0:28 - Photos galore. What is cooler than browsing all your photos on the PlayBook?

0:35 - Here we have a little camera action complete with a giant viewfinder.

0:41 - Easily swap between still camera and video camera. Recording time for video shows on the screen.

0:45 - When video recording is done, you have the ability to playback the video or delete the clip.

0:46 - Of course you can rock out YouTube with the Flash support.

0:49 - More multitasking goodness. Here we get the first real look at the layout of the PlayBook screen. Indicators up top for messages, music(?), signal strength, Bluetooth, battery and search. Again we see the card view layout of open apps with application icons down below. Apps we can see are the standard calendar, camera, pictures, video, music as well as Facebook and YouTube (which could just be open websites). There is also Tweet Deck (thanks to Adobe Air?) and Messager (I know it sounds weird but that's totally how it looks to be speeled) - which could be some sort of BBM or it could just be standard IM apps like Google Talk and AIM. There also seems to be a navigation bar for views of All, Games, Media, Social and Favorites.

0:55 - The media app looks very cool with layout of all of your album art.

0:57 - Tap an album and the player starts up. Album art on the left with track listing on the right. The play, skip and stop buttons are on the bottom along with track time and shuffle/repeat button.

1:05 - First glimpse of two-way video calling. Plain and simple layout with End and mute buttons on the bottom of the screen.

1:14 - Some action in the web browser showing off tabs and more Flash love.

1:22 - A quick look at what is most likey the Kobo reader that will be launching on the PlayBook.

1:27 - "App Rocking" with some Twitter and YouTube love as well as what could be the PlayBook's app store?

1:32 - From here we see the calendar on the PlayBook, but also notice the device to the right. The two look to be in sync (device pairing) as we scroll through the calendar, contacts and that messager app that looks a lot more like BBM in this shot.

1:48 - We wind down with a quick recap of features as well as a bit of a look at the overall device.

Between the awesome specs and the new QNX operating system the BlackBerry PlayBook is shaping up to be quite a device and more so a user experience. With so many ways to create apps for the PlayBook, including Adobe Air and Flash, we should see a plethora of apps hit quick. Hopefully RIM will make the PlayBook SDK available early so we have loads of apps to play with at launch. I for one can't wait to see what amazing stuff gets churned out for this new device and definitely can't wait to get my hands on one!