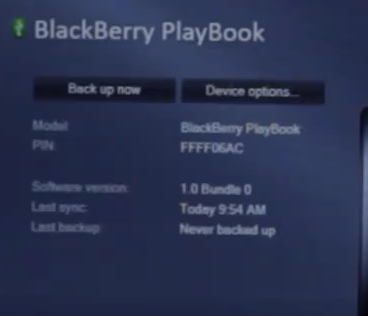 Depending on whom you ask the BlackBerry PlayBook could or could not have a PIN attached to it. Most folks when asked will likely tell you the BlackBerry PlayBook has no PIN on it but when you ask some PlayBook developers they'll tell you it most certainly does as the BlackBerry PlayBook SDK and tools have a spot for a BlackBerry PIN. The above image was taken from the video released earlier today and shows a PIN in Desktop Manager. Either way, we've seen both cases in the past through various videos and demonstrations so again, we're all left wondering if there is more to the story here.

Could it be that the WiFi only versions may not make use of a BlackBerry PIN and only those with 3G and 4G modems will have that access -- or is this something we'll see later on? Will all PlayBooks get their own PIN without needing to bridge connections from a BlackBerry smartphone? If so that could mean we'll start seeing BBM, email and various other BlackBerry PIN specific services enabled on the PlayBook without the need for a BlackBerry smartphone. In any event, I'm guessing right about now we'd all just settle for some release dates and pricing structures.