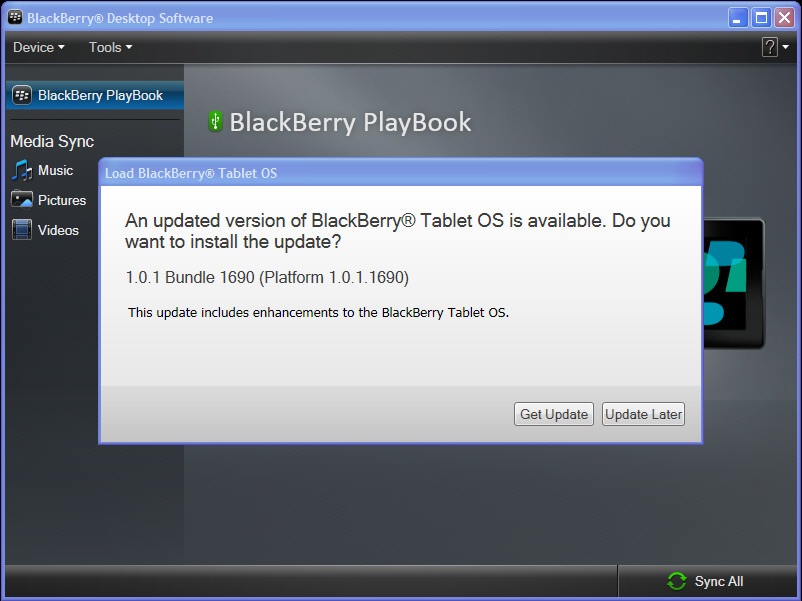 ** Update 2: Looks like .1690 is available via WiFi now, so it's definitely an intended release. Not quite sure why my unit picked up the quincy stuff - maybe due to the fact it's prerelease hardware. Will be buying a new PlayBook in the morning so it's all good! **

* Update: OOOPS. With new icons for Server Urls, Bug Reporter and Quincy now installed on my PlayBook, I'm assuming this was an internal build that wasn't really meant for general consumer installation. I guess we can call this the LEAKED version of a PlayBook OS.  Thanks RIM!!! *

Well this is interesting. While Adam and I have been hitting the Check for Updates button on the PlayBook constantly looking for a new software update, it turns out RIM has pushed one out via Desktop Manager. Plugging the PlayBook into the Desktop Manager via microUSB cable popped up the above prompt to upgrade to version 1.0.1.1690, which I'm in the process of doing right now as I blog this.

This will be my 4th OS update in ten days on the BlackBerry PlayBook, this one coming on the eve of the PlayBook's official launch date. If we see any major changes, we'll hit be sure to report them. It's maybe a little too soon to start up an Official Findings and Fixes thread in the CrackBerry forums for this one, seeing as only a handful of people have the device at this point, but regardless you'll want to keep it locked to our BlackBerry PlayBook forum for everything and everything BlackBerry tablet.
NEVER GONNA GIVE YOU UP NEVER GONNA LET YOU DOWN