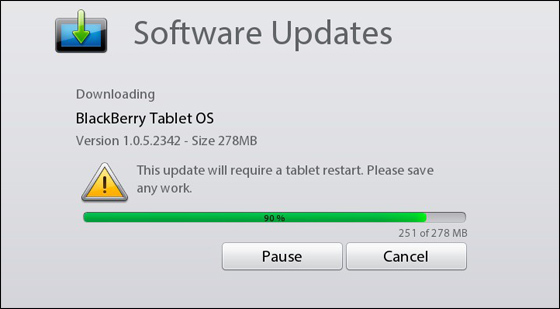 *Update: The OS update appears to be live for most people now, so if you're not one of those that already has it because you've been sitting there pushing "Check for updates" since this post went up, you can check it now and get to downloading!*

RIM dropped word tonight that an OS update for the BlackBerry PlayBook will be available shortly to address a vulnerability identified by Adobe regarding Flash:

Those curious about the Adobe vulnerability can look here for more info. Flash 10.3 should be hitting the PlayBook soon, but we likely won't see it in this update (will still be on flash 10.2, though based on Adobe's bulletin I'm guessing we'll see 10.3 sooner rather than later). Keep in mind this isn't just a PlayBook thing... we're talking flash pretty much everywhere. It's great to see RIM be able to push out an update so fast (go #TeamQNX!!).

Discuss this  in the CrackBerry BlackBerry PlayBook forums