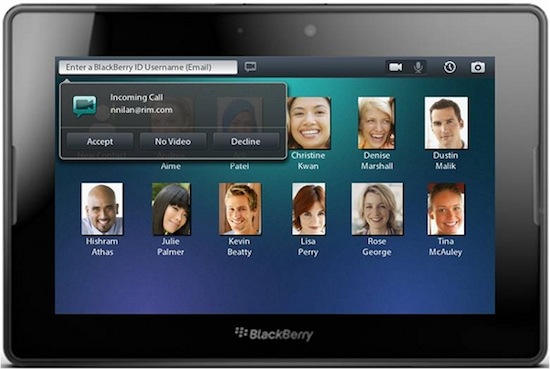 We heard earlier today that a new OS update for the BlackBerry PlayBook would be made available as early tonight and now we have some details as to just what will be included in the new software. OS 1.0.3 will include both the much anticipated video chat as well as BBM (via Bridge). Document editing via Bridge is a new feature that will allow users to edit documents stored on your phone via the PlayBook, and also users will now have the ability to create browser bookmarks on the homescreen for one-click access.

The update is scheduled to roll out later this evening and should be fully available by Tuesday. To check for the update, go to Settings > Software Update on your PlayBook (or just wait for the notification). Keep reading for full details on all the included features.

The Video Chat application enables video and voice over Wi-Fi calling between BlackBerry PlayBook tablets in peer-to-peer or enterprise environments using your BlackBerry® ID profile. Here are some of the features I'm really excited about: