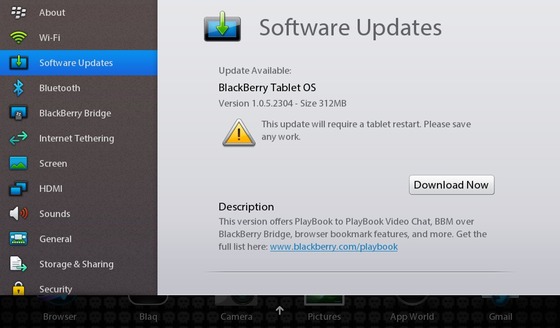 It's been quite some time since the last BlackBerry PlayBook update and many users have been asking when the next one will roll out. With a lot of rumors and speculation now past us, we can say that today is the day for an update to roll out. You'll find the changes listed below for your viewing pleasure:

For some, the update may not appear to be much but it is in fact laying the groundwork for larger updates that will be rolling out soon. Go ahead, check for updates -- it should be there for most folks now. if you're not seeing it, sit tight it's on the way. Official changelog is available after the break, courtesy of our friends over at Inside BlackBerry or you can head on into the CrackBerry forums and share your findings right now!

We've added support for the TURN (Traversal Using Relay NAT) protocol, which enhances Video Chat connections between users when their call is crossing between a public network and an enterprise network behind a firewall.

Automatic Wi-Fi hotspot detection in the BlackBerry Tablet OS v1.0.5 makes it easier to connect to a Wi-Fi hotspot (at a coffee shop or airport, for example) during the set up process.

This new option allows you to add an extra level of volume to help maintain an enjoyable audio experience with your headset in noisier areas, such as airplanes.

How to upgrade to BlackBerry Tablet OS v1.0.5